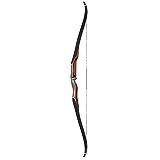 It's an odd thing reviewing a high-end, well-made, traditional recurve bow, because it almost becomes feature-less. If it does everything right, there's not much to say about it!

That's *almost* the case with the Bear Super Kodiak. It's one of the oldest American traditional recurves, and in many ways, it set the model for what American recurves could be.

Is it perfect? No, and it's not perfect for everybody—but there's a lot of we like about it.

Below, we'll go over what's great (and what's not) about the bow, and we'll start broad and then get detailed:

We think this is a great pick for traditional archers—and has been for a while, ever since Fred Bear designed it decades ago. It features all of the mainstays we'd hope to see on a traditional recurve: a long hardwood riser designed to reinforce the limbs, high-strength fiberglass that protects and buttresses those limbs, and fortified limb tips so you can use newer bow strings (and not worry about your bow string chewing through your bow after a couple of shots). Because it's a traditional design, it may not be for everyone—it's designed for instinctive shooting without a bow sight, and that's not everyone's cup of tea—and you need to be very certain of your draw weight, because there's no changing that draw weight once you get it. With those two things in mind, we're happy to recommend the Bear Kodiak to lovers of traditional bows old and new.

The first is kind of fascinating—take one look at the Bear Kodiak and you'll see that...

It's Got a Very Unique Riser Shape

The riser on the Kodiak is really long for a recurve bow—and if you take another look, you'll see that it's actually incredibly long. Whereas many other risers meet them limbs and then seem to stop short, the riser on the Kodiak extends north and south from the centerpoint and then travels up the limbs behind them to reinforce them. Not only does it look really cool, but there are two reasons that design is noteworthy:

> It provides more stiffness during the shot cycle, and that's one of the reasons the bow can handle so much draw weight—the bow is manufactured in draw weights of 35, 40, 45, 50, 55, and 60, and anything about 50 pounds on a recurve is really getting up there; and

> It adds some heft to the bow during the shot process. The bow itself is 60 inches, which is pretty typical for a traditional recurve, but pretty short in the grand scheme of things—target bows can get much, much taller than that—so it's nice to have a little north/south steadiness.

While we're talking about the riser, we should mention that...

It's Got Solid Construction

Bear bows have a long reputation for rugged design, and many of the other Bear models we've looked at—including the Bear Grizzly (review) and the Bear Sonoma (review)—live up to that reputation. The Kodiak is actually one of the "forebears" of those bows (get it? fore”bears”? …sorry), and in many ways, it set the standard.

But let's take a closer look at the details, because the Bear Kodiak actually incorporates some features that make it stand out, even among traditional bows:

Riser Design. The handle of the bow is made from laminate pieces, including hardwoods in cherry and maple tones, and if you look at the riser beneath the shelf, you'll actually see two very slender limb laminations that run from the top of the riser to the bottom of it. Those provide a little extra support for the pressure put on the bow during the draw cycle;

Belly and Back. Both sides of the bow—the belly, which faces the archer, and the back, which faces the target (that sounds backwards—yes, we know) are both made of a high strength fiberglass with a black matte finish. That, too, provides reinforcement (and looks pretty rad—we tend to think of that color as "dead of night"); and finally

The Limb Tips. This is the detail that makes the Super Kodiak stand out from other traditional recurves. The tips are handcrafted and layered with fiberglass, which means they're a lot sturdier that the limbs on most traditional bows.

That limb construction is a big deal, because it means...

You Can Use FastFlight String!

This is kind of a "hot topic" among traditional archers—and a “hot topic” in a traditional endeavor is kind of funny, if you think about it—but here's the background info you need to understand why Fast Flight string (and reinforced limb tips) are a big deal:

Eventually, though, bows strings got much stronger, and Fast Flight strings—one of the newer, tougher strings—would end up eating through the limb tips at the top and bottom of a traditional bow. So if you wanted to use a traditional bow, you couldn't use the new type of string, because it would destroy the bow. And that was a bummer, because string design had advanced so much, that shooting with one could provide much more accuracy and force—AND they were way quieter. All of those factors are pretty darn important if you're a bow hunter, and people really wanted to figure out how to use the new bows strings on their traditional bows.

So THAT'S why reinforced limb tips are a big deal: they allow you to use Fast Flight strings, and a lot of archers love that.

But, honestly? We're skeptics of just about everything, so even though the Kodiak is designed to handle Fast Flight strings... honestly, we'd still use traditional strings! That’s up to you, though, and whatever you decide, we’d urge you to make a daily observation of your limb tips, just to be prudent.

This is the last design feature we'll discuss: the shelf. Recurve users tend to think long and hard about the riser and the limbs, but they overlook what could easily be seen as the most important feature of a traditional recurve: the shelf.

We're pleased to report the shelf—in our most humble opinion—is cut-past-center, wide enough (but not too wide) for arrow passage, and floored with a thin layer of bear hair (to provide a very-soft-but-very-sturdy cushion as the arrow flies over it) and leather side plate (to reduce some of the side-to-side motion that may occur because of the archer's paradox). In other words, it's well-designed.

Seriously—the shelf on a traditional recurve (or even a recreational recurve, like the SAS Spyder recurve) is really important. It may seem like an inconsequential platform, but when you consider that it's one of the few parts of your bow that actually touches the arrow as much as the string does (even longer, in fact!), it's easy to see how important it is. Always give the shelf a good look, if you're thinking about a recurve bow.

OK, last but not least:

We Know We Should Stick to the Facts, But...

We love the way a well-made bow looks. We just do! And in our reviews, we often wax poetic about bow appearance… too much, perhaps, because our love poems don’t really tell you very much about whether or not a bow is a good choice.

But... well, we can't help ourselves. We love design, and we love bows that look rad.

And we think this bow looks rad. And here's our favorite part of it: If you look at the back of the bow—the side facing the target—you'll see that there's a sharp shelf that transitions the riser to the limbs. That shelf continues unchanged all the way to the riser tip, which results in a very sharp, strict line. That shelf, too, is detailed with trim, to accentuate that recession. Just gorgeous. Possible Negatives About the Kodiak

It’s our role, as reviewers, to provide possible negatives about the products we discuss, and that’s what we’re doing here in our Bear Super Kodiak review. These factors may not be "true negatives," inasmuch as they are things you need to keep in mind if you're interested in the Bear Super Kodiak.

There Are No Ports for Extra Gear

If you're got a lot of experience with traditional bows, you're probably thinking, "Well, obviously...!" but a lot of the people who read these reviews are new to archery, and it's up to us to introduce all the info that people—especially new archers—need. So! With that in mind:

Traditional bows tend to have very few options for add-ons, and on many of them, you can't add a bow sight, or a stabilizer, or any of the other items that modern archers use to enhance their accuracy. Some have ports/holes in the side where you can screw in a side quiver (and that can be great for bow hunting), but many don't even have that.

The Kodiak continues in that vein—it is a traditional bow, after all!—and you may not be able to dress it up the way you'd like. It's designed for instinctual shooting, and if that's not your bag—or if you're not willing to learn!—it may be wise to go with a recreational recurve like The Samick Sage, which will allow you to add a bow sight, a stabilizer, and a number of other aim-enhancing pieces of equipment.

The Wood May Not Always Arrive in the Colors Expected

This is important to mention, especially because we so lushly described how beautiful we think this bow is: because each bow is made from unique materials and different pieces of wood, sometimes the colors in the actual riser may be different than what you expect. Instead of a cherry-colored wood, it's a little lighter or darker. Instead of a maple-color wood, you get a dark brown. OR—and this is also pretty common—you get a few "blemishes" in the wood of the riser. That's actually pretty common.

For us, we think these imperfections make the bow unique, but—as people who are clearly obsessed with the look of a bow—we totally get it when people aren't pleased with the specific look of their riser. You expect one thing, and get another.

This happens, so it's something to keep in mind.

You Need to Be Certain of Your Required Draw Weight

If you're new to archery, we'd advise you to go to a pro shop or a range and do some practicing with some recurves of varying weights, and see what you can handle. It's a true-blue bummer when you buy a bow and find out it's too weak/too strong, and you want to avoid that.

If you like archery history—or if you're just looking for a solid traditional recurve—this is one of the few that we'd recommend. It's got a solid-yet-graceful design, it's got a generous platform made to provide some stability for arrow travel, and it's got reinforced limbs so that it's a little more durable than really old traditionals. It's important that you know your draw weight and realize that the color of the riser may be a little bit different than what you'd expect, but other than that, we feel great recommending this to people looking for a solid traditional bow.

So that wraps up our Bear Super Kodiak review. We hope that helps. If you have any questions, please let us know, happy shooting!