Bee Stinger makes three main stabilizers (the Sport Hunter Xtreme, the Pro Hunter Maxx, and the MicroHex), and we like each of them.

The MicroHex, however, is perhaps the most interesting product—it utilizes some really fascinating tech, and it's got a unique design that you don't usually see on high-end stabilizers.

We really like this one—although we do have a few gripes about it—and we get into all that below. Let's jump in with a summary, and then get down to the details:

The Bee Stinger MicroHex is another solid offering from Bee Stinger, and it's designed specifically for high-end performance: it's main function is to dampen vibration upon arrow release, so that the limbs of the bow achieve static state as quickly as possible, and arrow itself is not interrupted by any movement of the riser.

It's an adjustable stabilizer, and it features 3 x 1-ounce weights so that you can make it heavier or lighter as your shot requires. It's not perfect—it would be nice if it came in a wider weight range / with more weights, and it would be nice to see a 12-inch model for very long-range shots—but in all other respects, it meets all our expectations for a stabilizer. Thumbs up.

Pros of the MicroHex

We'll start with a feature that's common to all (current) Bee Stinger stabilizers:

It's Adjustable. This doesn't seem like such a big deal, but it's actually a selling point of all Bee Stinger stabilizers, and one of the factors that set it apart from a lot of other products: the unit comes with individual weights that you can add and remove to make the stabilizer heavier or lighter. For the MicroHex, the weights included are 3 x 1-ounce discs.

If you look at a lot of the low-end/no-frills stabilizers on the market, they're usually just a single weight—what you get is what you get. The addable/removable weights allow you to increase the end weight of the stabilizer that increase its vibration-dampening qualities/silencing abilities, or take them off if you've got a lot of other gear and you want to light up your bow a little bit.

It Features Internal and External Dampeners. We just mentioned "no frills" stabilizers, and on a lot of those models, they use an external dampening system to gobble up vibration. Usually that design includes fins—flaps of rubber or plastic that shake upon arrow release, and thereby diffuse some of the bow's movement—and sometimes they look like thick tassels. They're *OK* and honestly, they can lend some stability to a bow, and for many archers / bowhunters, they're plenty enough.

Higher-end stabilizers, however, often use an internal dampening mechanism. It's usually some kind of proprietary material that's located inside the housing of the stabilizer, where it's protected from the elements, and eats up vibration from inside that stabilizer. That's the design of Bee Stinger's other stabilizers, the Sport Hunter Xtreme and the Pro Hunter Maxx.

What we can do, however, is appreciate how many different ways that technology is used: Bianchi has used it in their high-end road bikes, so that world-class cyclists can speed over cobblestone streets and not get knocked around;

Wilson has used it in their high-end tennis rackets, because in the hands of a world-class athlete (or even a weekend warrior), those things vibrate like a trampoline when you serve with them; and it's even used on the booms on sailboats: the boom is the long rod that keeps the mainsail in place, and that rod can vibrate so much that it makes it difficult to navigate the sailboat. Here's a video of two guys at a tradeshow for boats, where they're talking about the Countervail tech.

Skip to :45 to see the experiment:

That's a pretty clear example of how Countervail can take the shake out of a bow. As always, we need to be responsible reviewers and remind you that Countervail technology will not make you Robin Hood—it's not a given that it'll make you super-accurate, and it’s not a given that it will solve all your bow-related problems—but darn if that isn’t a neat feature.

Thin Diameter. This is another feature you'll only find on high-end stabilizers: a thin diameter on the stabilizer itself. No-frills stabilizers tend to be a little bit bulky, and if you find yourself shooting / bowhunting in rough weather—wind, rain, etc.—a thinner stabilizer won't get pushed around by the elements as much. It's not a huuuuuge deal, but it can help.

It's Offered in 3 Lengths. They are: 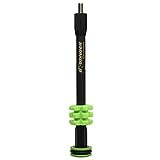 and the Bee Stinger MicroHex 10-inch: 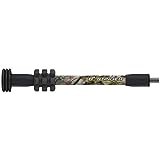 Cons of the MicroHex:

As we mentioned above, we take great pride in being "responsible reviewers," and we always try to detail the ways in which a product may disappoint you, or not be right for you. Honestly... there's not too much wrong with this stabilizer. Here are our only complaints:

Not Enough Weights. As we mentioned above, the MicroHex is manufactured with 3 removable 1-ounce weights. That's good, and it's a good start, but we'd like to see more weights included. The Bee Singer Pro Hunter Maxx also comes with 3 weights—but it features a 2-ounce weight, a 4-ounce weight, and another 4-ounce weight—which allows you to add a lot of heft to your bow. That's great if you're a taller archer with a longer draw length, and/or if you're using a longer bow stabilizer (like the 12-inch). You can buy extra weights (like these: the Bee Stinger End Weights), but it would be nice if those weights were included.

It Takes Some Time to Tune. This isn't so much a rebuke of the MicroHex, as it is a complaint about all adjustable stabilizers: they take a while to tune. When you change the weight of your stabilizer, you need to see how it performs at each weight level, and see what works for you personally. Then, if you add remove other gear (like a bow sight, quiver, etc.) you need to do all that over again. Not the biggest deal in the world, and that's something we and many archers enjoy, but if you hate that sort of thing, it can make sense to go with another model, like the Limbsaver Windjammer Stabilizer, which is a solid stabilizer that features a single weight.

That's it, really. Other than that, we don't really have much to complain about.

You May Also Want to Consider...

We've mentioned this elsewhere, but you may also want a left-right counterweight to your bow, to compliment the regular front-back balance that a stabilizer offers. This is often the case with bow hunters who attach a quiver to the riser of their bow—the left-right balance of the bow can get a little thrown out of whack.

If that describes your setup, the Bee Stinger Micro Hex Counter Slide W/Dovetail may be able to provide a little more left-right balance to your shot. It's basically a MicroHex with a weight that veers out to the side, and you can slide it further towards the front or back of the stabilizer and see what works for you. This, too, requires a lot of tuning, but when used properly, some people find that it adds a bit more heft to the bow.

We've review all of Bee Stinger's (current) stabilizer offerings—the Sport Hunter Xtreme, the Pro Hunter Maxx, and the MicroHex—and we're big fans of all three. In the last few years, Bee Stinger has brought a lot of tech to their products, and that has resulted in a sort of "quantum leap" in terms of vibration dampening and silencing.

Reaching out to the Material Sciences Corporation was such a great idea, because while sometimes it's a smart idea to do your own R and D and develop your products on your own, sometimes it makes more sense to utilize the work of scientists who have made the topic their life's work. That Countervail Technology is so interesting, and we're wondering where else it could be used in archery—perhaps in arrows for recurves, which are known to wriggle like snaps upon release, because of the Archer's Paradox?

Who knows? It's fascinating think about, though, and for now, we can wrap up our Bee Stinger MicroHex review with this: we give the MicroHex 2 big ole' thumbs up.

We hope that helps—and, honestly, we hope it reminds you how fascinating archery can be, and how much it can change in the future, as archery / bowhunting companies embrace new ideas. So—good luck, have fun, be safe, and happy shooting!