In this post, I'll be discussing ARMGUARDS. First, I'll get to the products reviews: I've written a review of two "classic" armguards, two compression armguards that are basically sleeves, and a one guard that protects your forearm AND your bicep. After that, I'll discuss some buying features you'll want to keep in mind, and discuss why they're important to archers--no matter what type of archery you're involved in.

Hopefully, we'll figure out the best archery armguard for you, so that you can get back to the range or head outdoors, and start shooting some arrows. 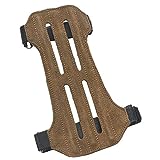 The OMP Mountain Man Arm Guard is, perhaps, the "classic" arm guard, and you may have already seen it at the range. It's very popular and it's got a lot of fans. This is actually one of the first armguards that I ever bought, and it's served me well.

It's made of suede and comes in a nice light brown color, which has a nice "traditional" feel to me. It has two adjustable straps, and that's a fantastic thing---I have pretty big forearms (although not as big as this guy), and they fit just fine. Some people prefer three straps, but I've found that two provides adequate protection (and I'm a pretty picky guy, if I'm being honest!).

If you're look closely, you'll see that there are four areas where suede is missing. This is a fantastic feature. If you're a sweater---that is, if you're a person who sweats a lot---having a sheath of leather on our forearm is going to make you incredibly hot. Those four strips allow for some ventilation, while also keep you safe from snap-backs from the string. A very nice touch, in my opinion, and especially if you live in a hot or humid area.

(By the way---there's no shame in being a sweater! I am most certainly one, and that's the reason I've used this guard for so long!). 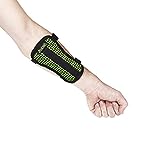 The Allen Company Mesh Archery Arm Guard is another very popular model. Allen sells a LOT of archery products, and they're a pretty reliable name.

If you're a petite archer (or if you're buying for a petite archer), this can be a great model. It's got two adjustable straps, comes in a few different colors (green, orange, and pink, usually), and it's fairly lightweight. If you're going to be on the range for a while, or if you tucker out quickly, having a lightweight armguard can be a blessing.

The guard itself is a big padded block of mesh, and all those layers in the fabric will eat up a lot of the vibrations that would transfer from the bow string to the skin. On top of all that, there's a black material that covers the mesh, for extra protection.

The mesh breathes, allowing your skin to sweat a little bit, and while it may not breathe as much as the OMP Mountain Man, it's not as hot as some options we'll discuss later.

Next up: COMPRESSION SLEEVES.

The Bohning Slip-On Guard is a little different than the previous two armguards, and while it may not be as popular---that is, you may not see as many people wearing them---there are certain people who LOVE this kind of guard. Here's why:

A lot of guards next to be adjusted upon first wear, and then after a day at the range/a day in the woods, need to be re-adjusted, because they've slipped over the course of your practice. That's fine for most archers, but for some people, it's absolute torture. If their armguard needs to be readjusted even once, it's a huge hassle. They just want to shoot.

If that's you, this could be a good option. The guard has no clips, straps, or loops. There's nothing to adjust on it, even if you wanted to. It goes on at the beginning of a session, and you take it off at the end of the session. No fuss, no muss.

The downside is that it doesn't offer as much protection as a more traditional armguard; it just covers a larger portion of your arm. So if you're using a heavy bow, you may want to look at one of the other models.

Even though "Tarantula Sleeve" sounds a little bit like a horror movie, or at the very least, something you'd want to avoid, the Tarantula Sleeve Armguard is an excellent product. It's a best-of-both-worlds kind of mode: it has a LOT of material to cover the forearm (and that makes it like a sleeve), but it's not a wrap-around guard like a sleeve, and instead has adjustable straps in the back.

Plus, it's got ventilation holes in the material, which may make you sweat a little less (although, your mileage may vary, of course). AND, it's camo, which is always a plus, because camo is a good fit in the range or in the field.

What else? It's lightweight, it can be used on your bare skin or over a long-sleeve thermal undershirt / flannel / sweater, and it's got three straps (most have only two). And, most importantly, the material is thick enough so that if the bow string hits your inner arm, you shouldn't feel it too much (depending on how powerful your bow is, of course).

I try not to write about the "best archery armguard" or anything like that, because very often, archery products are a matter of personal preference---but, if I did offer that sort of prize, this might in fact be the best armguard. It's an excellent choice. 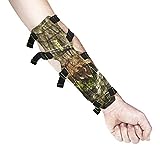 The Allen 4-Strap Armguard is a "next-level" product. If you want total coverage for your arm, this may be it (or, if you have reaaaaaally long arms and want decent protection, this may be it).

Here's another way to say that: if you have a very long draw length (32 inches or more), this might be a good option for you.

The guard itself is meaty and well-padded, with four adjustable straps---which is, right there, a bonus, because most guards have two straps, or three at the most. The piece itself is manufactured in mossy oak camo, and even though it's a name-brand product (Allen), it doesn't have any logos or insignias on it (which I personally appreciate).

And, finally, it's Made in the USA (or at least it was at the time I wrote this post). A very good option for someone with long arms or someone who's looking for full coverage. 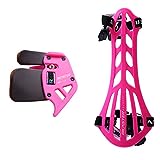 I include the Bicaster Archery Arm Guard for one reason: it's pink. In other words, it's not black or camo.

If you've been to the range lately, you've probably realized that archery gear has gotten a LOT more trendy. It used to be that everything was black or brown or camo. I think that's awesome, and I thought I'd include an armguard that's got a little color to it.

It's a good model, too---two thick adjustable straps, plenty of coverage from the wrist to the elbow, and tapered shape. An excellent option.

So, finally---onto some discussion about how to choose an arm guard, and why they're important.

What to Look For: Features

Unlike many archery products, the armguard is pretty straightforward. There are, however, a couple of differentiating factors you may want to keep in mind.

Type. Far and away, the most popular option is the traditional slab of leather (and that's the one that I use most, too). However, compression sleeves and full-coverage guards are a great alternative, and I know some folks who won't use anything else. Both types do the job, so it's really a matter of personal taste.

Material. Obviously, you want your armguard to be a sturdy little piece of equipment. This is not the time for finery and silk---you want leather, thick mesh, or a thick nylon. Then, once you've got a material that works, you need to be sure you're wearing it properly.

Fit. This is more of an issue with archery gloves, but it's definitely something to think about when you're getting an arm guard. Most armguards are adjustable, so they conform to your forearm size. I've talked about this elsewhere, but if you're the kind of person who doesn't like to have ill-fitting or misshapen clothes, or if a seem rubbing against your skin is going to drive you crazy, then you may want something that fits you exactly, and you should check out the compression fit armguards. They'll be a snug fit, and you won't have to worry about re-doing them all the time.

Look. Honestly, because most armguards are pretty decent, you're really just need to find something you like the look of. Luckily, there's a wide range of products---brown leather and suede (a great pick for anyone, including traditional archers), camo (great for hunters and outdoor enthusiasts), and assorted colors (black, red, blue, pink, etc), and they come in slightly different shapes, from the normal variety that cover the inside of your forearm, to sleeves that cover your entire arm. There's no "right" version---it's whatever you like the look of. Do I Really Need to Use One of These Things?

It's a good idea to use an arm guard, and there are a lot of ranges that won't allow you to practice unless you're wearing one.

It wasn't until I started this site that I realize: I am obsessed with safety. I'm like the worried den mother, always telling the Scouts, "Drop that! Stay away from other there! What is that? Put that down!"

Anyway, to get back to the question---yes, armguards are very, very good idea. Believe it or not, CONTUSIONS---aka bruises---are the most common injury for archers. They're not lethal, usually, but Good Lord do they hurt. And, if you're an adult, a nasty bruise is a bummer, but if you're a mom or pop and you're taking your kid to the range, that's the last thing you want. Your child will be in pain, and you'll feel like an awful parent.

So, yes, arm guards are important. Luckily, a good one will last for a while, so you won't have to replace it all that often.

"I Heard I Don't Need an Armguard, Because I Use a Recurve / Compound / Longbow / Whatever."

There's a temptation to ditch the arm guard once you become a more experienced archer, but I would argue that, because as you gain experience, you tend to use higher-poundage bows, and, as everybody eventually makes mistakes, a messed-up with a high-pound bow is going to smart much much worse than a mistake with a lower-pound bow.

That Should Do It

I think I've covered everything that needs to be said about armguards. Thanks for stopping by, and if you've got questions, leave 'em below!