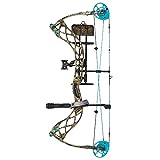 Many people have long held—incorrectly!—that bows are bows, and they're made for people. Gender doesn’t really come into play.

After all, that kind of made sense—if you’ve ever gone to an archery range, or strolled the aisles at your favorite pro store, you probably won’t find any bows that have an "M" or "F" on them.

So, for a long time, it may have been easy to turn a blind eye and say that archery equipment was simply built for people, and no specification was necessary.

Buuuuuuut—well, that’s not the case anymore! Diamond—and a few other manufacturers—have finally started making bows for women, and there’s even more good news: many of them are fantastic.

So, in this post, we’ll provide our Diamond Carbon Knockout review. It’s one of our favorite bows, and we’ll discuss why we think it's a great fit for female bowhunters and archers.

One of the reasons why think it's a great fit for women is because… it was designed for women!

That's obviously a promotional video, but the facts they present are accurate, and this is a bow made for women, designed for women. That's pretty cool, and we give a lot of credit to Diamond for taking the time and money to give their customers the individual attention they need, because as we'll discuss below, archery and bowhunting was never just a guy thing, even though the gear might have told you a different story.

Here are the specs for the Carbon Knockout:

and here are the specs for the Deploy SB:

Honestly, there are a lot of similarities here, so we'll start with...

The brace height on each model is 6.75 inches, which is short enough to provide a lot of speed, but long enough to be forgiving of any imperfections in your draw cycle, and the mass weight of each model is 3.2 pounds. That's fantastic—it's difficult to make a bow that weighs less than that, and when you're trudging through the backcountry—or even if you're in your tree stand hanging on to your bow all day—you most likely don't want something that's going to weigh you down too much.

Heavier bows can tucker you out, and when it finally comes time to take a shot at game, you don't want to be tired. Lower is usually better, and 3.2 pounds is pretty low—especially when you consider that plenty other Diamond bows are 3.6 pounds and above (the Edge 320 is 3.6 pounds, as is the Edge SB-1).

So that's good, and if mass weight is your most important feature, but you don't like the Knockout, there are a few other bows in the Diamond line that have the same mass weight: the Diamond Infinite Edge is 3.2 pounds, and the Deploy SB is 3.2 as well.

In most states, the required draw weight to hunt big game is 40 pounds. It varies state-to-state, but that seems to be poundage required to deliver an arrow with enough speed to put game down quickly. Both of these bows meet that requirement, and the range offered in the Knockout is a little less. There's nothing really male/female about that; plenty of bowhunters—especially traditional bowhunters, who use recurves without bow sights—hunt with bows in the 40-pound range. Both are good.

Arrow Speed: A Vanity Metric, and a Slight Edge to the Deploy

We're going to get into a little trouble saying this, but arrow speed isn't the most important feature on a bow, especially when the FPS is in the 300 FPS range, which is pretty darn fast. If your draw weight is sufficient, your broadheads are sharp enough, and your aim is accurate and you can deliver the arrow where it needs to land, you're in good shape.

A higher FPS helps, for sure, but we've seen plenty of people shoot "slower bows" and harvest plenty of game. 302 FPS is obviously faster, but 302 FPS and 330 FPS are both great.

This is one of our favorite features of the Knockout: the axle-to-axle length. At 30 inches, it's on the smaller side, and while that *may* cost you a little accuracy—longer bows tend to provide you with more accuracy—that smaller A-t-A measurements makes it a great option for backcountry jaunts. Larger bows can be an absolute pain to trudge through brush with, and a shorter, more compact bow can make things a lot easier.

Draw Length: No Need to Compare

Draw length is tied to arrow speed and a couple other metrics, but it's not really the measurement to compare bows. When you make a mass-market bow, you're trying to sell it to as many people as possible, so Diamond is just playing the odds here: the average female is a little shorter than the average male, so the draw length is a little shorter. That draw length of 27 inches should be good for women up to about 5-foot-8-inches. If you're taller than that, you may want to look for another bow.

So, which is better, and why did we write all this out? Here's why:

We've gotten some questions about whether bows made for females pack the same punch as "general market" / "men's" bows. In some cases, they're not as great. We wish they were, but that's not the case.

In many instances, though, they're every bit as powerful and effective as men's bows, and the Knockout falls into that category. It's a solid bow with solid specs, and if you've got the skill to use it, it can be an effective tool.

Next up in our Diamond Carbon Knockout review—something we need to talk about:

Let's Talk About the Color

One of our favorite aspects of the bow is that teal / azure / light blue on that cam. They say in that video we included above that the color was actually requested by their focus groups. That's pretty cool—there is a LOT of pink camo gear out there (and that's not that great for hunting, by the way), so it's neat to see a unique, gorgeous color like that on a bow.

By the way, we've heard one or two questions about whether that color will be an issue when hunting, and it most likely will not be—especially if you're in a tree stand or ground blind. Even if you're spot-and-stalk hunting, it's a more neutral color, so it should be fine—but if you don't like it, you may want to consider the Diamond Infinite Edge Pro. It's not made specifically for females, but it's got many of the same features, and it has an adjustable draw weight, which a lot of people like.

One Last Thing: The Name

How great is that name, "Knockout"? It's about game—it packs a punch, and you'll be able to hit your quarry with everything you've got—but it's also about looks, as in, "This bow is a knockout—just a beauty." Very clever. Archery names are just fantastic.

Our Recommendation: A Great Bow for Beginners to Intermediates, BUT...

We're happy to recommend this bow—not only is Diamond a tremendous company, but it's awesome that they're finally designing products for women, and we hope other bow manufacturers will follow suit. The bow is ready to rock, and needs very little adjustment before you take it outside—and that's fantastic.

Old-school bow-tuning used to take forever, and this is mostly good to go. You'll need to adjust the sight, and maybe replace the stabilizer, but other than that—there's a lot that's been done for you. We think this is a fantastic option.

The ONLY thing we'd advise is that you know your draw weight before buying, and that's something that many new archers / bowhunters don't know. The Knockout is currently made at 40 / 50 / 60 pounds. Most states require a minimum draw weight of 40 pounds to hunt game, so you're good to go, but we'd advise some wariness if you're interested in getting the 50 pound or 60-pound version.

Where to Get Bowhunting Gear for Women

Before we close out, we'd like to discuss this. Bows have come a long ways in recent years when it comes to fitting women’s' needs, but so has bowhunting equipment. For the longest time, if you were a female hunter, it meant—well, basically it meant that you'd be wearing men's hunting clothes.

There are obviously differences between the male and female form, and hunting attire was made pretty much exclusively for men. That's a shame, but it's also ridiculous—women have a long history of hunting, and it's almost bizarre that companies didn't meet the need for female bowhunting equipment.

Eventually, though, the market catches up to consumer needs, and entrepreneurs and marketers figured out that "Hey, it seems like women like to hunt, too." So now, not only do they larger retailers offer female hunting gear and attire—Cabelas has a women's clothing section, and does Bass Pro Shops, and Gander Outdoors, but now there are companies designed to specifically meet the needs of female hunters, like Prois Hunting.

Definitely check out Prois if you get a chance—they're one of the "first in the field," and as female involvement in bowhunting has increased dramatically over the last few years, we're excited to see new and innovative companies flourish.

Wrapping Up the Knockout

Alright, that about does it for our discussion about the Diamond Carbon Knockout.