Diamond doesn’t offer the widest range of bows, but all of their models are (in our experience!), solid, reliable choices. The Diamond Deploy SB is, no doubt, a high-end bow, and Diamond states quite clearly on their website that the Deploy is the "most technically advanced bow" they've ever manufactured. That's some big talk, so how does the Deploy actually rate? 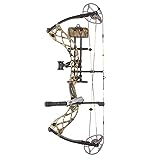 Below, we’ll jump into our Diamond Deploy SB review, and take a look at the features—and the features that set this apart from other bows—and see how they add up. There’s no doubt, this is a high-quality bow—and a standout in the already-worthwhile Diamond line—but let’s take a closer look and see how it plays out.

The first thing that strikes us about the Diamond Deploy SB is that some of its features are adjustable. For the longest time, a high-end bow was—well, it was what it was: if you bought a model with a 50-pound draw weight, then that's what you got. Adjustability wasn't an option for most high-end bows. But the deploy actually has a few features that are adjustable, including...

It's worth noting that according to the owner's manual, the bow performs best when it's at its peak draw weight of 70 pounds. It should still operate just fine at any of the other draw weights, but it's "maximum efficiency" mode is at 70 pounds.

IBO Speed. At a 330 FPS, that's about as fast as they come in the Diamond Line. You can find plenty of crossbows that shoot faster, but you won't be able to find too much compound bows that shoot faster. Not at present, anyway. That's an incredible leap forward for Diamond, and it's probably the most impressive aspect of this bow.

Mass Weight. This is another area where the Deploy stands out: it's *really* light. Many bows fall in the 3.5-pound and above range, so 3.2 pounds is pretty darn reasonable. That makes it a good option for spot-and-stalk hunting, where you'll need to lug your bow (and everything else you brought) all over creation, but it also makes it a good option for extensive practice.

Axle-to-Axle Length. At 31.5 inches, that's just enough to provide speed and accuracy. As a general rule of thumb, the longer the bow, the more stability it can provide—and therefore the more accuracy—but you don't want a hunting bow to be TOO tall, otherwise you'd have a difficult time maneuvering it at go-time. As with so many things related to bowhunting, it's a trade-off, and 31.5 inches is juuuuuuust where we'd want it to be.

Let-Off. This is the other "high-end" feature of the Deploy: let-off of 80%. That's getting up there. Most mid-range bows have a let-off of about 75%, and it gets very difficult to manufacture a bow with higher let-off without affecting other aspects of the bow. It's actually not the highest let-off in the Diamond line (the Edge 320 has a let-off of 85%), but 80% is still pretty solid.

That let-off is because of an aspect of the bow that we feel deserves its own section:

The Shape of the Cams

This is, perhaps, the most important aspect of the bow, and our Diamond Deploy SB review wouldn’t be complete if we didn’t look at it.

Diamond is currently owned by Bowtech, and many Diamond bows include Bowtech gear. The Deploy features the Bowtech Binary Cam system, and that system is actually one of our favorite aspects of this bow. You didn't think you were going to run into a photo of Captain Kirk, did you! Well, here we are.

It makes sense that the original compound bows feature round cams, because those are what pulleys use, and compound bows are basically designed off a pulley system. That ovoid shape is a "next-gen" development, because it does a lot of things, including: 1) it allows for a higher let-off—in this case, 80%.

Once those cams snap back into place, that's when your let-off is achieved (and it also affects that back wall, as well); and 2) it increases the FPS. Those ovoids create a catapult-like effect that rockets the arrow forward, and it's one of the ways a compound bow can reach FPS speeds of more than 300 feet per second. So that's one of our favorite aspects of the Diamond Deploy SB—those aggressive cams.

Here are some other features we think warrant their own section:

The Shape of the Riser

If you look at the counter of the riser, you'll see that it juts forward aggressively—that's one of the features that allows Diamond to decease the brace height of the bow (which, here, is 6.75 inches). A shorter brace height is an advantage, because it increases the FPS measurement, which is kind of the "holy grail" for most hunters.

An arrow that can travel with more speed will arrive at game quicker, and that game will have less time to react. And, not for nothing, but that aggressive riser and those near-parallel limbs—they make it feel more like a hunting tool. That's totally subjective, for sure, but we're suckers for design like that.

One other thing we like about the riser: the grip is molded for easy holding in the hand. That's a nice touch, and when you're out in the wild, it's small features like a molded grip that can increase your odds of success. It obviously doesn't make your shots a sure thing, but we think it helps a little.

You'll probably see that term thrown around a lot when it comes to Diamond bows, and it refers to the gear that a RAK-equipped Diamond bow comes with: a bow sight, an attachable quiver, an arrow rest, a 5-inch stabilizer (long enough to eat some vibration, but not so long as to catch on things in a hunting situation), and wrist sling, BCY string loop, and peep sight on the string.

You can get all that stuff on your own—and for many of us, that's part of the fun of things—but it sure is nice when those things come included, especially for those of us who in that beginner-about-to-jump-to-intermediate range.

What does "Deploy" mean? From Diamond: "It’s time to deploy maximum impact." Excellent!

Final Thoughts on the Deploy

This one is a thumb's up from us. We're big fans of Diamond equipment, and as this is one of their higher-end bows, we think it can be a great option with proper tuning and practice.