Diamond Archery has some really popular bows in their line-up, and the two that are most often compared are probably the Diamond Infinite Edge (their most popular model), and the Diamond Edge SB-1 (the model that came right after it). 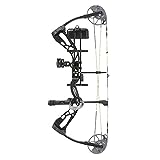 In this post, we'll take a close look at these two bows, how they compare, and which might be the right option for you.

This is a good place to start. Both bows are made for recreational shooting and bowhunting, but there are plenty of differences to look at. We’ll ping-pong back and forth between bows, and we’ll start off looking at the...

Infinite Edge: 13 to 31 Inches. The Infinite Edge is Diamond's go-to "mass market" bow, and when they designed it, they wanted it to be usable by as many people as possible. That range in draw length is good for everyone to very young archers, all the way up to very tall archers (the draw length of 31 inches can fit someone who's up to about 6-and-a-half feet tall).

SB-1: 15 to 30 inches. The SB-1 has a shorter draw length range (but still pretty large, in the grand scheme of things). That draw length of 30 inches is suitable for folks up to 6-foot-3-inches tall, and if you're taller than that, the Infinite Edge comes out on top.

Verdict: For most people, this would be a tie. The Infinite Edge is probably a better pick for very young archers, and for folks taller than 6-foot-3-inches.

Infinite Edge: 5 to 70 Pounds. This is, at present, the largest draw weight range on a Diamond bow. 5 to 70 pounds should be suitable for just about anyone, but keep in mind that...

SB-1: 7 to 70 Pounds. This ain't so bad either. Even very small kids should be able to pull 7 pounds (and that's before we consider the let-off, which we'll discuss in a second). 70 pounds is pretty high—you can find higher, but that's up there—and it's powerful enough to hunt just about all North American large game.

Verdict: A tie, really, but the Infinite Edge has a lower bottom measurement.

SB-1: 3.6 Pounds. This isn't terrible, but it's definitely heavier.

Verdict: Infinite Edge gets the prize. That lower mass weight isn’t a big deal if you shoot here and there, but if you engage in hours-long practice sessions, or if you’re a dedicated bowhunter and need to aim for minutes at a time, that lower weight can be important.

Infinite Edge: 7 Inches. This is a pretty common brace height, and good for hunting bows, because it provides both arrow speed and a liiiiittle forgiveness in your shot. It's the same as the...

SB-1: 7 Inches. This is one of those measurements that ultimately becomes a matter of preference. 7 inches is reasonable, though, for sure.

SB-1: 31 Inches. What's fascinating is that these two measurements—the brace height and the axle-to-axle length—make this a very similar bow. And we'll talk more about that below.

Infinite Edge: 310 FPS. For a mid-range bow like the Infinite Edge, 310 feet-per-second is pretty good, and that's why we've recommended it to new bowhunters. There are bows that will proper arrow with greater speed, but they tend to high-end bows (or crossbows!). 310 FPS is very good. But, obviously, not as good as...

SB-1: 318 FPS. Diamond upped their game with the 318 FPS, and while those 8 feet may not sound like much, the faster you get, the harder it is to increase that measurement. 318 is excellent for a mid-range bow.

Verdict: The SB-1 takes this one, and if you’re bowhunting, those 8 feet per second can make a big difference—game is quick!

Infinite Edge: 80%. This is above-average for a bow in this range, and very good for mass-market bow. And that's why it's a little surprising that the let-off on the SB-1 is...

Verdict: Tie. Don't get us wrong—80% is still very good, and if you're going to jack up your draw weight to 50 / 60 / 70 pounds, 80% can provide you with a lot of comfort and ease to aim. But it is surprising that both of these bows have the same let-off.

So it would seem that these two bows are almost identical, right? The specs all seem the same. They even look very similar:

They’re not the same, though—there are actually some important differences between the two, so now…

It really does seem like these two bows have a whole lot in common. Even the features that are different aren't really *that* much different. So what gives?

We've written... goodness gracious, at this point we've written hundreds of bow reviews, and we've found the following: 1) people get really obsessed with feet-per-second and let-off and other numbers-based details, but they…

There are two main differences between these two bows that won't show up in a spec list. They are:

The Ease of Adjustability

The Diamond Infinite Edge was a great success for Diamond, and because of its incredible adjustability, it was a great option for both beginners and intermediates. You can make the draw weight light, and then increase it as you gain strength, and you could even buy the bow as a younger person and use it as you got older by extending the draw length. The only problem was...

It wasn’t *really* that easy to adjust. It wasn't! In many cases, people had to bring it to the pro shop to get it adjusted (and we advised many people to do so).

And that's one of the real advantages of the SB-1: it's easier to adjust—and designed to be easier to adjust. Diamond made a lot of effort to make adjustability easier, and they even put videos on YouTube to show people how to do it:

So that's Big Difference #1, and it’s a big one—especially if you’re new to archery, or getting the bow for a younger person.

The second big difference is...

Cams are designed to do a lot of things—pulling on the bow string to propel the arrow forward being the main one—but they need to reliable, and the Bowtech Synchronized Binary Cam system—which is on the SB-1 but not on the Infinite Edge—is designed for reliability. It's manufactured to keep the cams moving as mirror images to each other, so that the nock—the part of the bow string that holds your arrow in place—travels forward in as flat a flat trajectory as possible.

So that's Big Difference #2: the cam system. Another big difference.

The Diamond Edge SB1 vs the Infinite Edge Pro: Our Verdict

Of these two bows, the SB-1 comes out on top—and that's by design: it's *supposed* to be the better bow—but honestly, there's more in common here than not. Here's how we'd express it:

> Both are great bows, and both are good for recreational shooting and bowhunting by people of all ages. From a performance angle, they're very similar, and we've been pleased with both—but at the end of the day, the draw cycle is a little smoother on the SB-1 because of the Bowtech Synchronized Binary Cam system.

> If you want a bow that you, yourself, can adjust so that it meets your draw weight and draw length specifications, the SB-1 is probably the better bet. It's easier to tune for beginners, and there are some really helpful guides on YouTube put up by Diamond.

> If you don't want to fiddle with the bow, and are fine taking it to a pro shop for tuning, the Diamond Infinite Edge will do you just fine. Have the pro shop rep adjust it to your specifications, and go from there. It's a solid bow, and we've used our model for years.

There you have it!