In this post, we’ll talk about a model that we think is one of the best bow sights out there: the HHA Optimizer Lite. We’ll start with a broad overview, and then go blow-by-blow over the features. There’s a lot to like, but there are also a few small imperfections we should talk about if you’re interested in this puppy. Alrighty, alright, let’s get to it, so sit tighty: 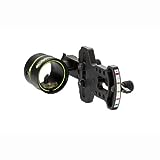 In our most humble of opinions, the Optimizer Lite is a great option, and probably one of the most feature-rich single pin bow sights made for the mass market. It’s got an adjustable rheostat so you can change the brightness of the pin (and we’ll explain that below, if it doesn’t make sense to you), a re-enforced casing around the pin to protect it when you drag your bow through the mud and muck, and most importantly, it’s micro-adjustable—something we look for in all high-performing bow sights. It doesn’t measure single yards, and that’s a mark against it, but with proper tuning (and proper skill, obviously!) you can set it for shots at about 60 yards or maybe a little more. Also, you need a little space to get it set properly—40 yards at the very least, in fact—so keep that in mind if you’re an urban/suburban shooter without a lot of open space. All in all, a great option for archers/bowhunters looking for a single-pin bow sight.

Now here are those details we promised:

Here, in no particular order, and the features that make the HHA Optimizer Lite stand out. There are, of course, a few features that we *don't* like, but we'll talk about those later.

Here's what the Optimizer has going for it, in no particular order:

It's Got 5 Inches of Fiber Optic Material, Making the Pin Very Bright

This is one of those features that bow sight manufacturers brag about, but if you're new to archery and/or bowhunting, and more particularly, if you’re new bow sights, you won't have any idea why fiber optic material is a good thing.

That may seem pretty obvious if you've been around bow sights for a while, but it's our job to bring everybody up to speed, so thank you for your patience 🙂

So, when HHA says that it's got 5 inches of fiber optic material circling that housing of the bow sight, they're telling you that it provides a lot of luminosity to the sight pin, and that's great for bow hunters and 3-D archers who are shooting at targets in low-light / early-morning situations (or even full-light situations!). That meets our expectations of HHA—they're known among archery folk to have very bright lights on their pins, so we're happy to see that they've continued their efforts in that area.

With all that said, there's something else really neat about all that fiber optic material on the Optimizer:

This feature takes a little explaining, especially if you're new to bow sights, so here goes (and if the following explanation just confuses you further… well, watch the vid!):

A rheostat is a device that regulates the flow or the amount of something in a specific tool. On the HHA Optimizer, the rheostat is an aluminum sleeve that encases the fiber optic material in the housing of the bow sight, and you can adjust that sleeve so that the fiber optic material accepts more light or less light, making your pin brighter or not as bright, depending on your needs.

Alas, this is one of those situations where a picture—or better yet, a video—is worth a thousand of our words. You can just to 0:30 here to see it in action—the video is from an HHA rep at a trade show, and he's discussing the HHA Optimizer Lite:

The rheostat is a very cool feature, because while there are certain situations where you'll absolutely need a bright pin, there are other situations, like mid-day hunts / shooting sessions / target practice, where's not necessary.

Next up in our HHA Optimizer Lite review—an important feature which often gets overlooked:

The Pin Is Reinforced for Sturdiness

While this seems like a small deal, it's actually a feature we like a great deal—the pin in the bow sight is encapsulated in a protective aluminum guard. That makes it a little more sturdy and more resistant to damage than many other bow sight pints out there.

We love this feature. When you're using a regular bow sight, it's a huuuuuuge pain if/when you're crawling around to get a great shot, and one of your pins gets dinged up—you have to re-organize your pins and re-tune the sight. But remember that the Optimizer Lite is a single pin bow sight—it's only got one pin, so if something happens to that pin, you're S-O-L (stinkin' outta luck).

So that reinforced aluminum guard on the pin is a really great feature. HHA says on their "Features" page that the pin guard is indestructible, but... well, that can't be the case. Something’s got to be able to destroy it. We're sure it's very very tough, but as we haven't tried to destroy it, we hesitate to say that it's "indestructible." We'll go with "designed to be very sturdy and withstand some knocking around."

It's Got Micro Adjustable Windage

This is the feature that separates the "good bow sights" from the "very good bow sights": micro adjustability. The bow sight itself allows for fine tuning, with some really nice features:

> When you adjust the windage (that is, the horizontal deviation—aka, when you adjust the sight to the right or left), there's a satisfying "click" as it moves to the next increment... that's just a lovely feeling, and it helps you get exact measurements;

> The mechanism is silent when it moves. If you're in a hunting situation, that's obviously of the utmost importance.

You Can Sight-In Without Tools…

...and that's great for a hunt. If you're on the range or practicing on your property, a piece of archery equipment that requires tools isn't really a big deal. You can turn to a friend, or head to the shed, and get what you need. But when you're in a hunting situation, and you need to do some adjustments on the fly, it can really be difficult to 1) figure out which tool you need; 2) get to your backpack / vest / bag to get it; and then 3) make the necessary adjustments to get back in the game. When an archery part doesn't require tools to set, that can be a great thing.

And, listen—that "no hands adjustability" does NOT mean the Optimizer doesn't require some fine tuning. It absolutely does, and we'll talk about that in a moment, because not everybody loves that aspect of the bow sight. But if you need to do some quick fine-tuning on the go, it can be a great feature.

HHA Makes Lots of Variations of the Model

This review is for the HHA Optimizer Sight 5519 1-Pin x .019, but HHA makes the Optimizer with a range of different scopes sizes, pins sizes, etc. Here's the range of features (at the time of this post):

Pin Size: This is the real differentiator when it comes to versions of the Optimizer. HHA makes the pins in thicknesses of 0.029 inches (that's the thickest); 0.019 inches (this is middle-of-the-road option); and in 0.010 inches (this is the thinnest). Pin thickness is a matter of taste—a thin pin will allow you see your target more clearly, but it will transmit less light to the pin, making it less ideal for low-light situations, whereas a thicker pin will transit more light to the pin—making it great for low-light situations—but it will conceal more of your target. It's a give-and-take that you'll need to figure out for yourself;

Mechanical Rheostat. HHA makes the Optimizer with or without this feature; and, finally

Handedness. We love this—HHA makes the Optimizer for both lefties and righties, instead of making a "for-righties-only" version that lefties need to figure out how to add to their bow.

As we said, this review is for the HHA Optimizer Sight 5519 1-Pin x .019 RH, meaning it's for righties, it has .019 pins, a rheostat, and a 1.625-inch housing. That's probably what most archers / bowhunters are looking for. However, you can search for other stats to suit your needs. ...And, Finally, What's Less-Than-Optimal About the Optimizer

Alright! Now that we've gone over the good stuff—and don't worry; there's a lot of good stuff, and the negatives don't outweigh them, in our minds—we should go over the "meh" stuff. None of it is too bad, but it's worth noting.

On the HHA Optimizer, you can measure to within 5 yards of your target. That's great for closer targets, where you can give your target the old eyeball and get a good guess-timate, but it has diminishing returns for a target that's reaaaaaaally far away. For that, yardage in single-yard increments are almost always better. So while this can be a great bow sight for near targets, if you’re shooting at targets very far away, you may want to look into a bow sight with single-yardage increments.

If you’re looking for a bow sight with single-pin yardage, HHA also makes the HHA Optimizer Ultra Lite, which has that functionality. 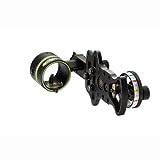 It's Not an Out-of-the-Box Tool, and You'll Need to Sight It In

This isn't the harshest criticism, because most bow sights need some sort of setting, but tuning the Optimizer can be a little tricky, and you need some time—and some space—to make sure it'll work for you. Here's what we mean by that:

When you get the Optimizer, in order to make sure it shoots accurately, you'll need put a "sight tape" on the face of the bow sight. To do that, you need to complete what HHA calls the 20/60 test, where you shoot an arrow at a target 20 yards away, and then a target 60 yards away, and then do a quick equation using an HHA conversion sheet. The conversion sheet is usually included with the product, but you can also find it online / at the HHA website, and it will tell you which sight tape you need to add to the bow sight.

This is another one of those instances where a movie comes in very handy, and here's one that walks you through the process:

It's not difficult, per se, but it's important, and it keeps the Optimizer from being an out-of-the-box option.

You Need to Take Care of the Sight Tape

We tend to give a lot of attention to the sight pin, and obsess over whether or not that gets dinged up in the field, but of equal importance is the integrity of the sight tape on face of the bow sight. If you ding up those numbers—and there's no protective shield that covers it—it can be hard to use. So be careful with that. You can get a sheath to cover it, but nonetheless, be careful of it.

Our Final Thoughts on the Optimizer

We like it a lot. It's a high-performing single-pin bow sight, and we think it's great for people who are just getting into single pin sights, but we also think it's got enough "deluxe" features to keep veteran shooters and bowhunters happy. With its extensive fiber optic material, high adjustability, and micro adjustability (which we really like), there's a lot to like here.

Alright, we hope our HHA Optimizer Lite review helps you make some decisions regarding your shooting and hunting plans. Good luck, be good, and keep rocking!

The Garmin Xero A1i vs A1: Differences, Similarities, and What the Features Actually Do