In this post, we'll provide our Limbsaver Windjammer Stabilizer review. We're fascinated by Limbsaver, because the focus of their company is VIBRATION, and how to decrease the amount of bow movement when you shoot. 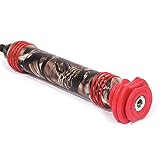 That may sound strange, but it's actually a really fantastic way for a company to approach archery and bowhunting. Bows—even the high-end ones, that have a lot of engineering behind them—create a lot of TWANG! when you shoot them, and quieting some of that noise and shakiness can lend a lot of accuracy to your shots.

That twang is loud, too, and can scare away game you're hoping to harvest.

So, Limbsaver—full name, "LimbSaver / Sims Vibration Laboratory"—has a range of products, but the core of their business are those tools that reduce vibration and provide balance—balancing stabilizers, limb dampeners, string silencers, and recoil pads.

So how does the Windjammer add up? Let's take a look at the components of the stabilizer one-by-one. If you're in a rush, though, here you go:

SUMMARY OF THE LIMBSAVER WINDJAMMER STABILIZER:

Limbsaver is a great company, and we think the Limbsaver Windjammer Stabilizer is a great option. It's designed to make your shot smoother and quieter, and to reduce some of the "wrist shock" jumpy bows can create. The piece is made from top-notch materials, including 6061 aluminum alloy (and we describe what that is below), as well as Limbsaver's NAVCOM material—which, in our minds, is what really sets the stabilizer apart from other models. Lightweight gear fanatics might be disappointed at the 13-ounche weight of the stabilizer, but in the grand scheme of things, that's still on the light side. In our estimation, this is a solid option for better groupings, a quieter bow, and smoother shot cycle.

We always chuckle when bow manufacturers discuss the material their bows/arrows/etc. are made with. If you're not a metallurgist or familiar with metallurgical analysis‎, how on earth would you know what 6061 machined aircraft aluminum is? We had to look it up, to be honest!

And, it turns out it's a really fantastic aspect of the Windjammer. Aluminum 6061 is an alloy—a metal made by combining different metal elements—and Aluminum 6061 contains silicon and magnesium as its main alloying elements. That combination of elements makes 6061 easy to weld and shape—good for Limbsaver, when they're manufacturing these stabilizers—but it also makes it resistant to oxidization, which makes it great for repeated use / repeated use in harsh weather conditions.

We're not big fans of aluminum for arrows, but they're a fantastic alloy for stabilizers.

This is another feature that you'd have to look up in order to know what it is. "NAVCOM" refers to "Noise and Vibration Control Material," which is proprietary to the Limbsaver company—meaning, it's a "secret sauce" and they won't tell us what it is, other than a material designed to resist and inhibit movement. The NAVCOM fills the housing of the stabilizer, to reduce to inhibit motion, and in turn, turn down the noise any parts of the bow that move during the shot cycle.

When it comes to stabilizers, the material in the actual stabilizer is what separates the boys from the men, so to speak. Low-end stabilizers typically just use rubber as their material, because—well, it works pretty well, and it's not too hard for manufacturers to get. The NAVCOM has a lot of research and development behind it, to add to the properties of rubber. "Rubber Plus," if you will.

And that's the real feature of the Windjammer: that NAVCOM material. Archers and bowhunters like the look and shape of a stabilizer, but really, the most important feature is the material that tames the bow. A tame bow that doesn't jump around during a shot is much more likely to provide you with reliable groupings during practice, and reliable accuracy on the hunt. There are other things we like about the Windjammer, but this is our favorite feature, and why we recommend it.

For target archers, that measurement is fine—it doesn't really matter too much.

For bowhunters, we think 7 inches is right in that "Goldilocks Zone"—not too short, not too long. It's long enough so that it can gobble of shake and twang (and by the way, we hereby reserve the name "Shake and Twang" for our next bluegrass group), but it's short enough so that you won't get stuck in thick brush on a hunt. If you've ever used a longer stabilizer and tried to navigate thicket, it's torturous. Stabilizer length is usually a matter of personalize preference, but we've found that 7 inches works well.

Next up in our Limbsaver Windjammer Stabilizer review:

Weight: 13 Ounces, Which is Not Too Bad

We know a couple of guys who are super-into the lightweight gear trend—which is probably not a trend at this point, but here to stay, and that's a good thing—but while 13 ounces may be a bit too much for them, it's fine if you're not obsessed with weight. It's not onerously heavy, and while it *does* add a high percentage of weight to the bow—at 13 ounces, it's almost a pound, and many of the hunting bows we've promoted recently are in the 3-pound range, so adding a stabilizer can increase the bow's weight by almost a third—it's not too much, especially consider the added benefit that a stabilizer can bring.

This isn't really a stand-out feature of the Windjammer, though, honestly—most stabilizers are pretty easy to install.

Here's the only thing we don't love about the Windjammer: there's a variation of the model with an add-on, called the Windjammer Balance System, which can provide a little extra stability and control.

As consumers, we get a little irritated at having to buy add-ons, additions, and new pieces, but... well, that's a personal preference as well. Some people love that sort of thing. We believe the Windjammer itself to provide a great deal of control, but you can add the Balance System if you want to provide a little more support.

A Bit of Advice: Consider a String Silencer

We've always had great luck with combining a stabilizer and some string silencers. They, too, are capable of gobbling up a lot of noise and vibration, and when you consider that the arrow leaves your bow because of the string, it makes sense to do all you can to keep that string calm. String silencers are also pretty simple to set up, and you can add them on your own.

OK! Let's wrap this one up. The Limbsaver Windjammer Stabilizer gets...

Two thumbs up. We're been big fans of Limbsaver, and we like the Windjammer a great deal. When coupled with proper training—because great gear isn’t worth squat unless you’ve got the skills—we think this can make a great difference in your shot game.

OK! Good luck, have fun, and be safe!