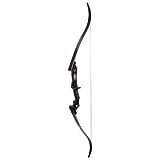 The Jaguar is an interesting bow, and it was fun to write this review—it's something of a hybrid, and it captures all the fun and discipline of a traditional recurve bow, while also being able to incorporate aim-enhancing gear, like a bow sight, bow stabilizer, and so on. We think it's a great option for target shooting, but one of the few recurve bows that's also up to the task of bow hunting, if that's what you're in it for.

So, below, we'll dive into our Martin Jaguar review, and take a closer look at the bow and see what works, what might need some attention, and how the bow compares to its cousin, the Martin Jaguar (spoiler alert: it's not as quiet, but it's a lot lighter).

Pros of the Martin Jaguar

While not perfect, the Jaguar has, in our humble opinion, some really great things going for it, including:

The Jaguar Is a Takedown That Accepts ILF Limbs

So, there's a lot to unpack in that statement, and if you're new to archery, here's what that means:

The Jaguar is a takedown bow, meaning that you can take the limbs off it, and replace those limbs with limbs that will decrease or increase the bow's draw weight (meaning, it will make it easier to pull the bow string back or harder).

The riser on the bow—the piece that you attach the limbs to—will accept ILF replacement limbs, so if you want to replace the limbs, you don't need to find specialized limbs that only fit the Jaguar.

That is about as a good as it gets for a takedown bow, because it can be a true pain when your recurve only takes a very specific type of limb, and you have to chase them down all over creation.

By the way, we're not sure why they went with 29 pounds instead of 30, and if you think you know, jump over to our "Contact" page and drop us a line—we'd love to hear your thoughts!

...and that's pretty reasonable for a recurve bow. Lighter bows are good for a number of reasons, but one of the most notable is that they're easier to practice with: if you like long practice sessions, using a lighter bow can be a *lot* easier on your arm. After about 20 minutes on a heavy bow, you'll be feeling it—so that low mass weight of the bow itself is a nice feature.

The bow's weight is actually one of the factors that differentiate the Jaguar from Martin's other popular takedown, the Martin Saber (review). It's lighter—which is a good thing—but we suspect that's because it doesn't include some of the vibration-dampening gear that's inside the riser of the Saber. You can still make it shake less/dampen some of the sound, but this is actually one of the negatives about the Jaguar (and we'll talk more about it below).

It's Got a Very Short Brace Height

This is actually an under-appreciated aspect of the Jaguar, and it's one of the features that the Jaguar and the Saber have in common: a really short brace height. At 6 3/4 to 7 1/2 inches, that brace height is really on the short side of things. Many comparable bows have a brace height that *starts* at 7 1/2 inches (and the Bear Grizzly Recurve is a good example of that—it's a great bow and good for hunting, but its brace height is much higher).

So, with that info about brace height in mind...

That Makes It a Good Hunting Recurve

As a general rule of thumb, a shorter brace height on a bow will enable it to shoot arrows with more speed. When you're hunting game, you want your arrow to reach your target as quickly as possible—before it runs away. That short brace height can make the difference between harvest game and having the game dart back into the woods someplace.

Plus, it looks pretty awesome! The bow attains the short brace height by include a "deflex" riser in the design. On a deflex recurve, the actual grip area of the riser is set back a few inches, bringing it closer to the bow string. It you look at most recurves—and certainly most traditional bows—you'll see that the grip is not set back, and they have more of an "arc" shape.

There's another reason it's a good option for hunting, though, and that's because...

It's Features a Port for a Bow Sight, Stabilizer, etc.

The vast majority of bow hunters use compound bows, and that's because you can reaaaaaaally load up a compound bow with helpful gear (and, yes, for you veterans out there—there are plenty of other reasons to hunt with a compound, but that's a big one). On compound bow, you can add a bow sight to help you aim, a stabilizer to give your bow some balance, and about a dozen other things to up the chances of you making a successful shot.

The design on traditional recurve hunting bows doesn't usually allow for those add-ons. Typically, a traditional recurve won't have ports where you can attach that gear, and the hunters who use them need to be incredibly capable, because they're shooting without a bow sight, a stabilizer, and so on. It's incredibly hard to do, and trad bow hunters train for years before they're ready to hunt without that gear.

We are 100% all for traditional archery and fully support those profoundly capable archers who are able to harvest game without using bow sights, stabilizers, etc.—but it's important to remember, those traditional archers are *incredible* shots and they've trained for years to hunt traditionally. If you're not at that skill level yet, it's unethical to hunt without a bow sight, stabilizer, etc.

So, that capacity to accept added gear is a big advantage of the Jaguar, and it leads us to the last of our "pros":

It's a "Best of Both Worlds" Bow

It's basically a bow with a traditional feel but with the capacity for added gear. That's awesome, and it's a good way to sum up the bow, actually!

But, as we always say, nothing is perfect, and neither is this bow. So let's talk now about the... Cons of the Jaguar

There are three things we think people need to keep in mind when they're looking at the Jaguar:

You May Need to Quell the Vibration a Bit

We mentioned this above: The Jaguar can roar a little bit.

Recurve bows like this one tend to vibrate and make a bit of noise, and that's not the biggest deal if you're just target shooting—although that vibration can wobble the arrow a little bit—but it can be a really big deal if you're bow hunting. A noisy bow can scare game away, and that's a bad thing.

You can add string silencers and silencing tape, and very often, that'll help a lot. We mentioned the Martin Saber above, and that bow actually incorporates vibration dampening technology inside the bow, and that's great—but it does add almost a pound to the bow (and on a bow this size, that's a lot).

You Can't Shoot Off the Shelf / It Needs an Arrow Rest

The shelf on the Jaguar is *really* wide, and that makes shooting off the shelf impossible, because you have no idea where the arrow would go. That's one of the factors that keeps this from being a "true" traditional bow (with the takedown limbs being another factor).

The bow comes with an arrow rest, designed to hold your arrow snug so you can shoot accurately (or as accurately as you, yourself, are capable of shooting!). If you don't like the one that comes with the bow (and we think it's fine), there are plenty of other arrow rests out there—and they're probably the easiest piece of gear to choose and add, so that's not the biggest deal.

The Bow is for Righties Only

No Jaguar for you, lefties! Unfortunately, the world of archery is just like the rest of the world, and doesn’t offer as much gear for lefties as it does for righties (and this is an issue we hear about a lot, as the Editorial Director of this website is a lefty!).

If you're looking for a comparable bow, you may want to check out The Samick Sage Premier. It features many of the same benefits of the Jaguar—although it doesn't have the deflex structure or the aggressive look—and it's just as easy to use.

Wrapping Up the Jaguar

There you have it! That's our Martin Jaguar review. We find the Jaguar to be a capable bow, nice and lightweight, with a great "traditional" feel, but with the capacity for aim-enhancing gear like a bow sight, bow stabilizer, and so on.

So that's it for us—good luck, have fun, and be safe!