"Spot Hogg" is kind of a funny name, when you think about it, because it sounds like something you'd name a bow sight: "What does it do?" "Well, it helps you spot hogs." Spot Hogg!

And while Spot Hogg does offer a line of bow sights, here we'll be talking about one of their bow releases: The Whipper Snapper Bow Release. 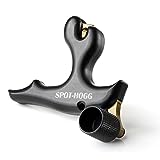 What do we think of it? Well, here's a quick review, followed up by some in-depth discussion. We like it, but you need to know exactly what you're looking for in order to make a wise choice. So here we go:

We like this model a lot, not only because it's highly adjustable, but because the release is designed to keep those adjustments in place: that's great for long practice sessions, but it's also great on hunting expeditions—knowing that your release should perform the exact way you set it can bring you a lot of peace of mind.

It's manufactured in four different varieties, and that's the rub—you need to know whether a 3-finger or a 4-finger release will work for you, and you need to decide on an open-jaw or closed-jaw model is best for your style of shooting / hunting (and if you're not sure, we provide some insights below). All in all, a solid model, if (and only if) you're looking for a hand-held release.

This, perhaps, is the best aspect of the Spot Hogg Whipper Snapper: it's a single type of bow release made in a variety of designs, so you can choose exactly what suits you. It's manufactured in four different types: 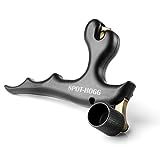 Let's talk about what each of those features mean and what benefits they offer for shooting / bow hunting, and which might be right for you.

Open Neck vs. Closed Neck. If you look at the top of each of those bow releases, you'll find that mechanism that attaches to the D-loop on your bow string. An "open neck" design is basically a hook, and you grab the bow string with it. A "closed neck" design features that same hook, but the hook is not exposed, and there's an extension that meets the hook. If that description is somewhat unclear, the images above may help.

So which is right for you? Here's how it usually breaks down:

Compare that to an open neck bow release, which you *can't* attach to your bow string, because it's... well, it's just a hook. If you tried to attach it to your bow string, it would fall off. This sounds like a bad thing, but it's actually a great option if you're a spot-and-stalk/run-and-gun type bow hunter, who moves about the hunting environment, and can't keep a bow release on the D-loop, because it would bounce around as you move and make noise (and be really irritating and get in the way of things as you walk).

Many bow hunters also like the "ease of use" that open necks offer—with practice, you can attach the hook to your D-loop simply by feel, so you don't have to take your eyes off your game when it's "go" time.

So that's the difference there, and like so many pieces of archery equipment, it largely comes down to personal taste. Plenty of successful hunters use both varieties.

3-Finger vs. 4-Finger. This refers to the grip of release—where you hold it, and how many fingers it requires to hold. It's probably true that a 4-finger release provides more security than a 3-finger release—how could it not, really—but 3-finger designs offer plenty enough area to tightly grasp the release, and in all our days of shooting, we've never had a problem maintaining control of a 3-finger bow release. Still, if you want a little more security, the 4-finger may be a better bet.

It's Got Adjustable Features

All four variations of the Whipper Snapper have a trigger barrel that you can adjust—as per the Spot Hogg website, you can put it in two different positions—and you can adjust the trigger tension, too. We appreciate that, and it seems like the longer you use a hand-held, the more specific you get about trigger tension.

While adjustability isn't really a stand-out feature—it seems like most respectable hand-held bow releases involve some sort of adjustability—it's still a great aspect of the Whipper Snapper, and old-school bow releases (and many "no-frills" versions) don't feature it. So that's nice.

The really nice aspect when it comes to the adjustability of the Whipper Snapper, however, is that...

Spot Hogg designed the model so that once you get your settings juuuuuuuuust the way you want them, they stay that way. That's the aspect we'd like to highlight, because it can be a real pain to get the settings right—especially when the tool itself is so small, and you need some really good fine motor skills to make adjustments. Adjusting the barrel isn't usually so hard, but fine-tuning the trigger tension can be. So that's a feature we appreciate, along with...

That set-if-and-forget-it design lends itself to long practice sessions, and we absolutely love that, because it reinforces how important practice is. Without practice, you won't be accurate, and without accuracy, you risk harming game instead of putting it down quickly. Go onto any bowhunting forum, and you'll see question after question about how to be more accurate, in order to harvest game more humanely. It's a vitally important part of being an ethical hunter, and it seems like Spot Hogg gets that idea—that long-term repeated practice is "the name of the game," so to speak.

So we like that design a lot, because the importance of practice can't be overstated. A bow release designed for long practice sessions gets two thumbs up from us.

We're a bunch of crumb-bums, aren't we? We always have to say a few negative things, even about bow releases we like. The Whipper Snapper gets positive reviews from us, but it's not for everybody. Here are some things you may want to consider:

A Thumb Barrel Isn't for Everybody. On the Whipper Snapper, and on most hand-held bow releases, the mechanism by which you release your arrow is a small-to-large barrel—which you usually pull backward with your thumb. This just feels weird for a lot of people—particularly people who rifle hunt, wherein you pull a trigger with your index finger to release a bullet—and it's a real turn-off for some people.

Again, that's a material of personal taste, but it's something we hear again and again when it comes to thumb releases. If you dislike thumb barrels, there are plenty of trigger-style releases you can use (but those are usually attached to wrist straps, instead of being hand-held releases).

No Camo. The Whipper Snapper isn't manufactured (at present) in any kind of camo design. That's not really a big deal for us, because the pattern is full black (and if you're not going to go with camo, that's definitely the next best option), but we know a lot of guys and gals who are camo-obsessed, and if it ain't camo, they ain’t interested.

Again, not the biggest deal in the world, but something to consider. If just simply can't do without camo, the Tru-Fire 4-Finger Hand-Held is a similar release, both in terms of design and quality.

They Can Get Slippery. Sometimes, when you're in rough, wet weather, it can be difficult to grasp a hand-held release. There are ways around that, and you can put an adhesive on it, or tape, or whatever suits you. Again, not a huge criticism, and more of a criticism of hand-held releases in general, but something to consider.

We'll finish up our Spot Hogg Whipper Snapper review with a quick summary: we like this model because it comes in every iteration you could hope for a hand-held bow release (3-finger/4-finger/open-jaw/closed-jaw), and it's highly tunable. We also really like that it's designed for long practice sessions—that's important.

You'll need to take a good look at your shooting/hunting style—if you're a run-and-gun/spot-and-stalk hunting, an open-jaw can be a good option, and if you're a tree stand/ground blind hunter, a closed-jaw may be what you're looking for—but if you can figure all that out, then this is a bow release we'd happily recommend. Two thumbs up.