The Best Bow Stringer for Your Bow in 2022

There are three kinds of stringers I discuss in this post:

There aren't too many stringers being manufactured, but there are some good ones out there. Here are what I consider to be some of the best bow stringers on the market: 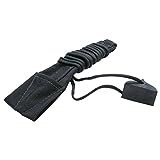 The Selway Limbsaver is, perhaps, the most popular bowstringer there is, and it's my favorite, by far. It's easy-to-use, sturdy, and tucks away in your bow case when you're done with it. No fuss, no muss.

Let's take a closer look at the details:

Sturdy Fabric. If you're concerned about the integrity of the fabric on the limb cup, you can rest assured: the fabric is made out of something called cordura, which is a super-durable material used in backpacks, luggage, and even military clothing. In other words, it's solid.

Limb Block. The limb block is made of a rubber that's pliable enough not to do any damage to the surface of the upper limb when you use it, but flat and sturdy enough so that it won't slip when you're pulling on the bow.

Pre-Knotted. The stringer comes with knots already tied into the string, so all you need to do is take it out of the packaging and use it. You shouldn't need to manipulate it in any way.

If you're a beginner, this is a great option. Most people get one of these when they start archery, and every time they need a new one, buy the same model again and again. Selway is a family company, and I've never bought one of their products and been disappointed. 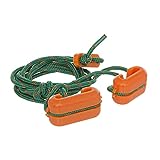 The October Mountain Products Flex Pro is similar to the Selway, but instead of a limb cup and a limb block, you've got two limb blocks. I have less experience with this bow stringer, but I have friends who use it, and love it. Having two limb blocks means you have cleaner access and a better line of sight to the bow string at the end of the bottom limb and the top limb, and that's ALWAYS a good thing.

For recurve bows, it has one narrow limb block and one broader limb block, and for longbows, both of the limb blocks are narrow. It's adjustable, so you can manipulate it for different size bows, and it's SOLID. A good option. 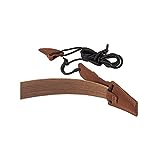 So why would someone want to use the Need Recurve Bow Stringer?

Ultimately, it's a matter of preference. Bow stringers all do the same thing---string your bow---and all three are a better option than stringing your bow using the "step-through" method or the "push-pull" method.

(By the way---if that's you, and you love traditional archery and archery products that look historical and not at all new-fangled, the E. W. Bateman Recurve/Longbow Stringer might be a good pick for you.

It works on regular recurves and longbows, and it's brown suede leather with a brown chord---looks exactly like something someone from the 14th Century would use!).

If you love traditional archery and you have a longbow, you may need a stringer large enough for your bow. I like the Selway Limbsaver Longbow Stringer. It's very similar to the Selway stringer I discussed above, but made specifically for longbows, and should work with bows up to 72 inches.

Any type of stringer will work---so ultimately it's a matter of preference---but if you asked me how I'd order them, I would say the best bow stringer is the Selway Limbsaver, second best is the October Mountain Stringer, and third best is the Neet Recurve Bow Stringer.

My Bow Came with a Stringer; Why Do I Need Another One?

It's my experience that the stringers that come with a new bow are... not great (or, as the English would say, "rubbish"). They're flimsy, and every time I've used one, I feel like my bow is about to pop out and fly across the range.

If you feel comfortable with the stringer that came with your bow, awesome! More power to you. For me, though, I like knowing that the stringer I'm using is sturdy---ESPECIALLY as I graduate to heavier and heavier bows, and the potential for a serious accident grows bigger.

Why Is It Important to Use a Stringer?

The most common answer among archers to this question is: you use a bow stringer because using the "push-pull" method or the "step-through" method can warp and damage the limbs of your bow, and using a bow stringer increases the longevity of your bow.

But that's not the real reason I tell people to use a bow stringer.

Have you ever seen "A Christmas Story"? It's the story of a kid in the 1950s whose sole Christmas wish is to get a Red Ryder---despite everyone telling him, again and again, "Why do you want that? You'll shoot your eye out." Ha!

SPOILER ALERT; stop reading if you haven't seen the movie...!

His dad buys him the Red Ryder for Christmas, and he (almost) shoots his eye out. And, as he stands there with his hand over his face, he says to himself in utter disbelief, "I can't believe I almost shot my eye out."

The real reason you use a bow stringer is because there's a chance that if you're using the push-pull method or the step-through method to string your bow, the bow can get out of your grasp and damage your eye. It actually happens, and I include a link to photos of guys who have done damage to their eyes in my post here. Take a look---it's pretty gnarly (actually, if you don't like gory stuff, don't look! It really is gnarly!).

So, protect yourself, and use a bow stringer!

That's It for Stringers

Who knew I actually had so much to say about stringers? And, believe it or not, there are three more things I'd like to add: