I love longbows. They're sturdy, they're works of art, and they're perfect mix of archery and history. If you use a recurve or a compound and you like archery, chances are very strong you're eventually going to fall in love with longbows.

In this post, I'll introduce longbows---what they are and how they work---and then I'll discuss the differences between a regular recurve and a longbow. Then I'll briefly discuss something called the War Bow (woah!), and finally I'll go over what I consider four of the best longbows and why they're fantastic. Then I'll get a little indulgent and opine about why I'm in love with longbows.

What Is a Long Bow?

Longbows look very simple, but they're actually very unique. Here are some of the most prominent characteristics of a longbow:

Difference Between a Longbow and a Recurve Bow

So now that we know a little bit about longbows, let's take a look at their closest cousin, the recurve bow (and then we'll get to the reviews, and hopefully find the best longbow for you).

I've included two images below: the top image is a recurve bow, and the bottom image is a longbow. Let's take a look at their similarities and their differences:

I'll include this factoid, just because "war bow" is about the coolest name imaginable. As I mentioned above, longbows can be made to be VERY powerful.

Make no mistake: modern bows are also very powerful. There are recurves with draw weights up to 80 pounds, and I know of a few compound bows that have draw weights of 100 pounds.

War bows could reach over 180 POUNDS OF DRAW WEIGHT, and were capable of shooting straight through medieval armor. Woah.

OK---let's get to those reviews. 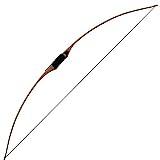 The SAS Pioneer Traditional Wood Long Bow is a fantastic longbow, and it's one of my favorites.

Let's take a look at some of the details:

This is a fantastic model, and perhaps the best thing about this bow is it comes in a range of draw weights. Because longbows are kind of a niche product---there are far fewer longbow archers than there are recurve archers or compound bow archers---it can be difficult to find a bow that fits your needs.

Plus, here's another amazing aspect of the SAS Pioneer: you can sometimes get it with a draw weight as low as 35 pounds. If you're new to archery, you want to start with a bow that has a lower-pound draw weight, and most longbows have VERY high draws weights. They're usually 50 pounds or more. So the option of getting a longbow with a draw weight of 35 pounds is pretty fantastic.

This is a minor squibble I have with this bow, but this isn't technically a longbow, because it has a shelf, and traditional longbows were made without shelves to place the arrow. That's me being a tightwad, though. In all other ways, this is a fantastic longbow. 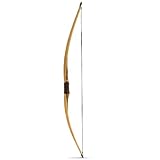 The PSE Sequoia Longbow  is an absolutely gorgeous model. Here are the schematics:

When people talk about gorgeous bows, this is what they're talking about. It's a sleek and streamlined and beautiful instrument.

PSE is a fantastic company, and they make a LOT of archery products. They mainly focus on compound bows, so it's nice to see them offer a traditional product. This is a very solid option for a mid-range longbow.

One quick, important note about this bow: if you're under the age of 18, it's not for you. You need to be 18 years or older to get your hands on one of these. 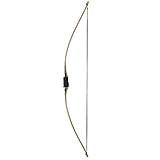 We're moving into the "high end" longbows, and the Bear Archery Montana Longbow fits that bill: it's a piece of art! From the grain on the riser, to the thinness of the limbs, to the leather handle, this is a beautiful bow.

Let's take a look at the details:

Bear Archery is another well-known company, and they make a lot of archery supplies, from bows to apparel to high-end rests and sights. In fact, they make a line of traditional bows, and these puppies are just plain beautiful. The Montana Longbow is perhaps their most accessible offering. 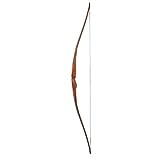 The last bow on the list is the Martin Archery Savannah Stealth Longbow, and it's perhaps the most prized.

This is another piece of art. I don't want to get carried away, but the riser looks like the underside of an eagle wing.

The riser is made from exotic bubinga wood, which is native to Africa and has a beautiful reddish / orange-ish hue, and lined with maple for contrast. The limbs are also made from bubinga, supported by fiberglass for strength. It has a finely-shaped rest in the riser and usually comes along with one Flemish bow string.

One of the features about this bow that I appreciate is that it comes with protective material---in this case, a bow sock. It's a shame to get something so nice and not be able to take care of it---especially a bow like this.

This is the type of thing that becomes a family heirloom. Martin Archery makes a lot of great bows, but this is among the best they offer.

OK! That's it for bows. The first one I mentioned---the SAS Pioneer---is a fantastic option, and it has a lot of happy users. It's a great choice if you're new to archery, or if you simply don't want to go for a high-end longbow.

If you'd like to get a little fancier, the PSE Sequoia, the Bear Archery Montana, and the Martin Savannah are fantastic options.

Allow Me to Wax Poetic for a Moment

One of my favorite aspects of archery is that archers have the opportunity to embrace advances in technology, or to embrace traditions and practices from long past.

In other words, you can buy a compound bow that's been made in a factory, or you can use a traditional bow, that's been crafted by an artisan. You can go high-tech or old-fashioned, and that choice is yours to make.

And I'm not knocking compound bows---I use them and I love them, and I *totally* geek out on the science behind them. The physics of a modern compound bow astound me, and I can't wait to learn about the new developments we'll see in compound bow technology over the course of my lifetime.

But there's something truly inspiring about traditional bows, and longbows in particular. If you go on YouTube, you'll find hundreds of videos that people made about longbows. It's not the most popular type of bow in the world, so why are there so many videos about them?

You might think it's about culture. A *lot* of the videos related to longbows are shot by English people. I think the English understand that the bow was, for centuries, an integral part of English national identity. They used in wars. They hunted and fed their families with it. There's even a mythical character, Robin Hood, who is known for three things: being English, messing with rich people, and using a bow. I think the longbow resonates with English people because it's such an important part of their history. But it's incomplete to link longbows solely to the English. There are plenty of videos about longbows shot by Americans, and they're obviously passionate about the weapon. But the appeal of the longbow is much broader than even that.

The longbow is not specific to any single culture. People from every walk of life---from Native Americans to Mongols to Hungarians to African tribes---have used the bow as tool to feed themselves and protect themselves. All around the world, we've taken natural materials, and transformed them into a simple-yet-sophisticated tool, and then passed down knowledge about how to build and use that tool from generation to generation. It's kind of amazing, if you think of it that way.

So that's the appeal---or, one of the appeals---of the longbow. Connecting with tradition, and connecting to the broader humanity who used bows to enhance their lives. Foregoing the seductive call of new technology, to reconnect with something time-honored and true and globally important.

Good Luck, and Enjoy Yourself!

If you decide to get into longbow archery, you're in for a good time. Longbow archers are PASSIONATE about the sport, and they're among the most knowledgeable archers you'll meet. Good luck, and happy shooting!