If you ask around, you'll probably find a lot of people who have a lot of good things to say about the Trophy Ridge Static Stabilizer, and we think that’s just about right. We're big fans as well, and while we do have a few (albeit minor) gripes with the Static—which we'll discuss below—we think it lives up to the hype.

So let's dive in and get to the details. Because we respect your time, we'll start with a summary for all you "I'm-in-a-rush-just-tell-me-what-I-need-to-know" folks out there, and because we loooooove talking bow gear, we'll get into the details after that.

While we would rank this is a "mid-range" stabilizer—there are a lot fancier options out there—we think the Trophy Ridge Static is just as good (if not better) than many of the more "deluxe" versions. It is, in our opinion, a really good stabilizer. It's manufactured in a really wide of lengths (3-inches / 6-inches / 9-inches / 12-inches), it's lightweight, and it's adjustable: there are individual weights you can add to the stabilizer to make it heavier/lighter, and if you'd like to go even heavier, you have the option of buying additional weights to add.

It's designed to do all the things a stabilizer is supposed to do: dampen vibration, reduce some of that "twang" you hear upon arrow release, and most importantly, give a steadiness to your bow so you can hover more accurately over your target.

There are only a few reasons why you'd want to select something else—and the biggest reason is that you're really tall and you want a heavier stabilizer, in which case we'd recommend the Bee Stinger Pro Hunter Maxx—but other than that, we recommend this highly for bowhunters, 3-D shooters, and recreational compound bow users who want to add some balance to their shot.

Pros of the Static Stabilizer

There's a lot to like here, so we'll start with one of the stand-out features of the stabilizer:

It's Lightweight. The Static is made from Trophy Ridge's Ballistix CoPolymer system, which is lighter than aluminum (25% lighter, in fact), but has the same strength. That's an impressive detail, especially because a lot of other stabilizers are made from aluminum (the Limbsaver Windjammer Stabilizer being one of them).

Keep in mind, that does not include the weight of the discs (which we'll talk about in a second).

As far as stabilizers go, that's pretty light, and for many of us, that's a big deal: not only does it make practice a lot easier—if you've ever shot end after end on a heavy bow, it can really wear you out—but it's great for bowhunters, especially for those of us who really like to get deep in our hunting environment.

It's Manufactured in a Range of Lengths. This doesn't seem like a standout feature, but it's actually a great thing (in our humble opinion, of course). It's made in 3-inch, 6-inch, 9-inch, and 12-inch varieties. There are plenty of basic stabilizers that come in a single length, and that's that (the Truglo Deadenator is an example), and even some of the higher-end ones only come in three lengths (the Bee Stinger Xtreme and Maxx are examples), but this is one of few stabilizers that comes in four distinct lengths. "Something for everyone," as they say.

Here's why that range is important: a longer stabilizer will resist more bow torque, provide more stability, but not every shooter can use a long stabilizer. Different shooters need different lengths. If you're in a ground blind shooting at close-range game, you won't be able to use a longer stabilizer in the blind—it simply won't fit, and the stabilizer will probably hit the inside front of your blind—so a 3-inch or a 6-inch can be a great option. If you're outdoors hunting elk in the open, or shooting from a tree stand in a broad clearing in the woods, you have a little more room to move around, and you can get a lot of balance and heft from a longer stabilizer—in which case, a 9-inch or a 12-inch stabilizer can make sense.

And, speaking of being outdoors, here's something many of us have experienced:

It's Designed for Rough Weather. This is an interesting feature, because we've looked at / used / reviewed tons of stabilizers, but very few of them actually market themselves to *the actual outdoor conditions* you may face.

If you look at the design of the Trophy Ridge Static, you'll see that it's got three oblong, curved holes in it. Trophy Ridge included these so that when you experience wind, the bow stabilizer plays a magical tune that hypnotizes your quarry into standing still. It's an incredible feature, and we can't think of another stabilizer that plays magical tunes.

We're kidding. It's designed so that wind and breeze travels through the stabilizer, allowing your more steadiness in your shot. That doesn't sound that important, but if you've ever been in late fall in the open plain with game right in front of you—and you can't hold your #@$&%*! bow still because of the wind—you’ll probably be able to see the value of that design.

It's Got Adjustable Weights. We probably should have mentioned this sooner, because this is one of those features that separates the basic stabilizers from the great ones: you can adjust the weight of the stabilizer by adding or removing weighted discs at the end of the unit (that is, the end furthest away from you).

That's fantastic, because—let's be honest here—a bow features really advanced physics that most of us don't really understand. We met get the basics of it, but very few of us actually get out a graphing pencil and calculate how much torque our bow is making, and how much it changes when we add a 3-inch stabilizer, vs. a 6-inch stabilizer, etc.

In other words, most of us don't know all the crazy math involved in a tuning a bow, and those discs allow us to experiment to find what works best. With the Trophy Ridge Static—and any other adjustable stabilizer—you'd shoot a few ends with no weight, and then one-by-one add all the discs you have, until you see what works best. It takes some time, but it can really improve your accuracy if you take the time to get it right.

So, that's another great feature. The Static comes with 2 individual discs that weigh 1 ounce each, and if you want add even more weight to your stabilizer, you can buy more (see here: The Trophy Ridge Custom Stabilizer Weight Set). 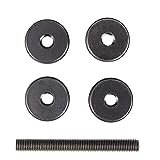 Cons of the Static Stabilizer

We mentioned that we have a few bones to pick with the Static, and we think they're fair. It's a fantastic option, but not perfect (and not perfect everyone). Here's how we think it plays out:

Lightweight is Great, But Sometimes You Actually Want Heavy. This is related to the last gripe: lightweight is good, but some archers—particularly really tall ones, with a really long draw length—may want a lot more weight in the stabilizer, particularly at the end of it. That extra weight can act as a counterbalance if you've got a really long draw length (of, say, 32 inches or more).

If that's you, you may want to look into the Pro Hunter Maxx, which comes in 8-inch, 10-inch, and 12-inch varieties, with as much as 10-ounces add-able to the end of the stabilizer.

As we mentioned earlier, the longer the stabilizer is, the less weight it will require to actually stabilize the bow itself—and if you don't have the length, you may need more weight in the stabilizer to get similar performance. So, with the 3-inch, you may need to use both of the 1-ounce discs on the 3-inch stabilizer, and you may want to consider adding more.

And... that's it, really! Nothing too serious. Before we wrap up, there's one other tool we should quickly mention:

The Trophy Ridge Side Bar

Compound archers—particularly bowhunters—tend to think of stabilizers as tools that go on the front of the riser, and forget about sidebars/back bars/V-bars/etc. Those tools tend to get complicated (and hard to use in a hunting situation, because they add a lot of "wideness" to the bow), but they can add a lot of balance.

The Trophy Ridge Static XS Side Bar Stabilizer is actually a smaller tool designed to offset some of that left-right movement.

It's made to offset the sight and quiver weight that can tilt your bow, and it has 3 different position where you can mount it. AND it includes 4 customizable weight of 1-ounce each, which we find wonderful, because we were complaining about that just a moment ago.

And, to be sure—you can achieve a LOT of balance and heft and noise-cancellation and vibration dampening WITHOUT a side bar, but it can provide some real benefits, so we thought we'd mention it.

"Static" is a Great Name, By the Way

Before we close out, we need to give propers for such a great name—when we hear static, we think TV static (well, those of us who are getting up there in years do, I guess), but the real definition of static is "lacking in movement." That's EXACTLY what you want in a bow stabilizer—for it to create a "lack of movement" in your bow during and after arrow release.

So, here's the "Conclusion" to our Trophy Ridge Static Stabilizer review: thumbs up. This is probably one of the most popular stabilizers out there right now, and we think it deserves the praise it gets. It features a lot of accessibility, and with the range of lengths it's manufactured in, you can get the length you need.

We hope that helps—if you have any questions, jump over to our contact page and let us know. Good luck, God bless, and happy shooting!