Alright! Let's talk about Tru Ball. They have a wide range of bow releases, and we've discussed quite a few of them. Today we'll be talking about the Tru Ball Abyss. How does it add up? What do we like? What do we not like? Let's take a look. We'll start with an overview, and then dive into the details: 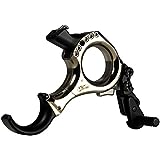 The Tru Ball Abyss Flex features everything we hope to see in a high-end hand-held bow release: it's highly adjustable (you can change the trigger travel, the trigger sensitivity, and the head itself is movable), but it also features some unique adjustabilities, and you can switch it between a 3-finger and 4-finger model, as well as the finger grip locations themselves (you adjust it forward up to 15 degrees to make arrow release a little more "crisp" or 15 degrees back to make arrow release a little more difficult). It's got a hook design—something that we as bow hunters / 3-D shooters / target archers hope to see, and while we can't recommend it for people who like "out-of-the-box" solutions—it takes a little set-up and time to make it so that it fits your draw cycle), we can recommend it to just about everyone else. All those features, in our opinion, put this in the “best bow release“ category, and we give it two thumbs up.

Alright, let's take a look at some of the features that make the Abyss Flex unique. The first feature isn't the fanciest, but it's something we really appreciate:

You Can Adjust the Finger Count. That's actually a really fantastic—yet common-sense—feature. Most hand-held bow releases come with a dedicated frame, and they're for 3-finger use or 4-finger use. It's one or the other, and if you want to switch from using 3-fingers to 4-fingers, you need to get a new release. That's true for most bow releases, from the "no frills" releases all the way to "deluxe" releases—even Carter releases (which we'll mention below) don't have that feature.

On the Abyss, however, if you want to change how many fingers you use to hold the release, you can simply remove the 3-finger frame from the bow release and replace it with the 4-finger frame, and vice versa. It’s one of the few bow releases we’ve seen that has that functionality (which is kind of surprising—it’s a great feature, and it’s not really that complicated from a manufacturing point of view).

So, if you like to switch things up—or if you're new to high-end releases, and you're not sure if you want a 3-finger or 4-finger—that's a really cool aspect of the Abyss. But what's also fun about that feature is that after you decide whether you want to attach the 3-finger or the 4-finger piece, you adjust the angle of the finger piece. You can make it flat (designed so that it activates the release quicker), or swept back a little bit (which gives you a little more time before arrow release). That, too, is a sort of "next-level" adjustability that's rare among hand-held bow releases.

It's Micro-Adjustable. This is the "big deal" feature that we need to see on bow releases before we can really give it our stamp of approval. A high-end, capable bow release should be very tunable, so that you can make it juuuuuuust so, in order to meet the unique needs of your draw cycle. The Abyss has got a number of different settings, but the most important probably are:

1) Multiple Finger Grip Locations. You can adjust each of the individual finger positions in a backward or forward position, up to 15 degrees;

Last but not least—and this is another easy, fantastic, common-sense feature—is that it's manufactured with two different thumb barrels: a wider one and a thinner one. That's a great little feature, and they didn't need to hire a scientist to figure it out.

Hook Mechanism. One of the most important parts of a bow release is the actual release mechanism itself, and most bow releases feature a caliper release—a set of jaws that open and release the arrow—or a hook, which you see on the Abyss Flex. There are pros and cons to each, but hook definitely has its advantages.

In a hunting situation, you can snag your hook on the D-loop of your bow without taking your eye of your game (you'll need a little bit of practice to do so, but it can be a very cool—and very useful—move when you get the hang of it). In a target shooting situation, it can introduce a little more "jump" on your arrows (which is a feature that back hinge / tension release fans usually appreciate). Plus, over time, hook releases can be a little easier on your D-loop, which is a nice little feature.

And finally, there’s one last feature we’d like to highlight:

It's Got a Movable Head. You can adjust the release so that the hook itself is set at different locations on the head. That allows you to set the string angle towards, or away from, your face, depending on how you shoot. You'll need to do some testing to see what works for you.

OK! Those are all the features we’ll be discussing in our Tru Ball Abyss Flex review, and all that adds up to a release with a design we admire. We're jumping ahead here, but it gets two thumbs up from us.

So with that said, does this release make sense for your set-up? Let’s take a look.

Honestly, we'd have a hard time declaring a winner in any kind of Tru Ball vs. Carter debate, and we happily recommend both.

We Would Not Suggest the Abyss If...

You're a New Archer. If you're new to the sport and you love top-of-the-line, high-end gear, we salute you—there are plenty of incredible products out there, and as much as we hate to admit it—we'd love to think that we're just great archers, and don't rely on gear—but a lot of gear really can help you on your journey.

With all that said, you might want to get another bow release if you're new to the game.

The Tru Ball Abyss is not a great "intro" model. In order to use it, it requires you to have an understanding of your bow, and a very detailed understanding of your draw cycle. It's also a little difficult for a new archer to adjust, and you may want to look at something few fewer options, and start there. We usually recommend the Spot Hogg Friday Night Delight, 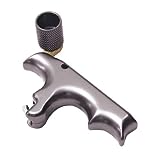 because it has a lot of comparable features, and if you're looking for something even more basic (but still worthwhile, in our humble opinion), the Tru Ball Max Pro (review) can be a good fit.

But we don't mean to tell you what to do. Is it possible you could use this and figure it out? Of course. Would there be a steep, frustrating learning curve? Yep! We think so. This is just a heads up.

You Don't Like Adjusting Gear. The Abyss is one of those hyper-adjustable models that you'll probably need to put some time into 1) learning, and then 2) adjusting. If you're the kind of archer / bow hunter who likes to get new gear and hopes that factory settings will match your needs, this may not be a good option for you. Chances are very strong it'll require some set-up and tuning.

This is a review of the Tru Ball Abyss Flex, which followed the True Ball Abyss. The two are slightly different models with a lot in common, but the Flex is the newer/fancier of the two.

Here's the quickest, briefest comparison we can give: the Abyss Flex is newer and fancier and comes with more options/adjustabilities.

If you have the original, don't fret. It's still a really solid bow release, and perhaps the most important feature of all these releases—the three-stage tension adjustment system—is the same on the original Abyss and the Abyss Flex.

It's a little odd to discuss "The Abyss" so much, because we have a philosophy friend—a bit of a chatterbox—who talks endlessly about "The Abyss."

Apparently, in philosophy (and we're paraphrasing here; we're not too much into philosophy), "The Abyss" refers to a sort of nightmarish nothingness from which no one can return—a meaningless void absent of purpose or joy.

So, just to be clear, we give "The Abyss" (the existential nightmare of nothingness) two thumbs down. We do not recommend The Abyss of nothingness of joylessness.

But we can give the The Abyss (the hand-held bow manufactured by Tru Ball) two big ole’ thumbs up. It's highly adjustable and it's designed to tighten groupings—basically, the two things we look for in a high-end hand-held bow release.

Alright, that's it from us—good luck, have fun, and happy-and-safe shooting!