Welcome to another one of our bow release reviews!

You know how we review archery gear? Yep: like a boss.

And in this post, we'll discuss the Tru Ball Boss X, and list what we think are its positives—along with some features you may want to be careful with.

Let's start broad and then get into the nitty-gritty:

We're big fans of Tru Ball, and there's a lot we like about the Tru Ball Boss X. It's highly adjustable, and its "no travel" design / super-light trigger is perhaps the main feature that separates it from other bow releases. It's got some other positive design features—a 360-degree swivel head, so that it can be easy to draw, and a small caliper to encapsulate the draw string—but we think its other main strength is that it's a little easier to adjust than other bow releases like it (and adjustability—and ease of adjustability—is another one of those features that separates the good from the great). As we said, it's got a super-light, "crisp" trigger, and that's not for everyone—if that sort of sensitivity isn't for you, we'd suggest another release (and we usually suggest the Spot Hogg Whipper Snapper as an alternative to the Boss). All in all, the Boss X is a solid option, in our humble opinion.

So let's take a closer look. We'll start with the "tru" stand-out feature, which is...

What We Find Boss About the Tru Ball Boss X

The first is actually a very big deal:

This is one of those features that separates the top-tier bow releases from the mediocre bow releases: how "crisp" the firing mechanism is. As far as "crispness" goes, "no travel" is about as good as it gets. There are a lot of bow releases on the market, and you'll often find on the basic/”no-frills” releases, travel can be issue. You pull the trigger a little bit... and nothing happens. That's not great—in fact, it's a frustrating, scary feeling—so the "no travel" feature can be a great thing.

And that's that, really—it's a simple, but powerful, feature. We'll follow this feature up with one that's closely related to it:

It’s Got Separate Adjustments for Trigger Travel and Sensitivity

This is something we appreciate, because figuring out how to adjust your bow release can be a challenge: all the parts are *inside* the bow release, the instructions are usually really vague (and manufacturers seem reticent to put video instructions on YouTube, which is super frustrating), and very often, the adjustment spots for different features (like travel and sensitivity) and in the same spot on the release, and you're never really sure what you're altering until you test the bow release out. So that's a big feature for us—tuning bow releases can be a real pain, and it's nice that Tru Fire is putting some effort into making them simpler.

And, in case you're unfamiliar with the terminology, here's the difference between travel and sensitivity: travel is the distance you need to pull the trigger in order to let loose an arrow, whereas sensitivity is *how difficult* it is to make the trigger travel. Those two terms kind of sound the same, and a lot people confuse them, so we thought we'd clear that up.

It Features an Adjustable Thumb Trigger

This is a great feature, but it's nothing special, really. On a high-end bow release like the Boss X, it's one of those things that better be there, or it's a real mark against the design. On the Boss X, you're able to adjust the thumb trigger so that's a little closer to you or a little farther away.

It Designed with a Smaller-Size Caliper

This is actually a really interesting feature: a smaller sized-caliper head. If you look at the release, you'll see that there's not too much room in the jaws on the end of the release:

Here's the 3-finger version of the release (affiliate link): 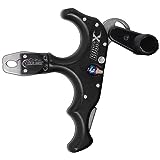 That's a fascinating—and yet very simple—design, that can provide some real advantage: if you have a wonky draw cycle and anchor, the D-loop on your bow string may wiggle around a little bit in the calipers while you're at full draw. A smaller caliper can reduce some of that travel. That's not a game-changer, but it is a nice feature.

It's a Hand-Held, Which is Probably (Still) the Most Popular Type of Release

It's Manufactured in 3-Finger and 4-Finger Varieties

We absolutely love this, because the differences between the feel of a 3-finger release and a 4-finger release are pretty dramatic, and people usually have an inclination to use one or the other.

As a general rule of thumb, 4-finger models provide a little more stability, and they can make it a little easier to draw back your bow string, because you're using all four fingers to grasp the release. That said, they can feel like a little "much," and a friend of ours once said that using a 4-finger release feels a little like doing a pull up. That's an interesting analogy—and not totally wrong!—and 3-fingered releases can feel a little less binding.

Ultimately, though, the choice is up to you. We not only love that Tru Ball made two different versions of the Boss X, we love that many companies are following suit. For the longest time, you didn't really see that in a lot of higher-end bow releases—very often, they came with one design, and that was that. If your release-of-choice didn't come in the design you liked, well, tough cookies, my man. That trend seems to be changing, and manufacturers of bow releases—and particularly higher-end / deluxe releases (like the releases made by Carter)—seem to be making a really wide range of models, with all sorts of configurations. We think that's fantastic.

So there’s the good stuff.

But, alas—our Tru Ball Boss X review would not be complete without a few negatives, so…

Two Things You Need to Be Aware Of

We like this bow release a lot and happily recommend it, but there are a few things you need to keep in mind:

The Boss X Can Be Crispy Like a Fall Apple

The Boss can be very “crisp,” or “hot,” if you like—meaning that you can set it so that you’ll shoot your arrows with only the slightest provocation.

If you've never used a truly "crisp" bow release before, be *very* careful on your first few ends. A no-travel trigger really is a different ball game, and you may let off a few arrows before you expect to. As always, aim only at the target and make sure everyone is behind you, and when you draw the bow string back, make sure your thumb is behind the thumb barrel so it doesn't go off during your draw.

It Can Be Challenging If You’re Wearing Gloves

Thumb releases like this one are great for both target shooting and bow hunting, but be careful on the hunt—especially if you're wearing any kind of glove. A no-travel trigger is SENSITIVE—we put that in all bold caps to accentuate how sensitive it is—and your gloves keep you from really feeling the bow release. In other words, your gloves could cause you to fire an arrow before you mean to, so be careful.

Wrapping Up the Boss

As far as named go, "Boss" is pretty boss, and we think this bow release deserves some praise. You need to be careful with it—and it may not be a great option for new archers or archers who don't have a lot of experiences with bow releases—but for everyone else, we think it's a solid option.

Alright, that's it from us for today. Good luck, happy shooting, and stay safe!