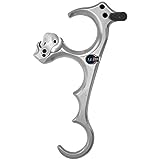 In this post, we'll discuss the Tru Ball HBC, which is short for "Honey Bader Claw." It's a fascinating bow release—with a great name!—and it's very popular among target archers and bow hunters who like hinge releases.

That said, the features on the HBC aren't easy to interpret, so if you're a little confused by the product description, you're not alone! We do our best below to "de-code" the features and put them into plain text, and describe what each feature actually does.

We’ll start our Tru Ball HBC review with the “pros” and move onto the “cons” after that.

The Tru Ball HBC Bow Release is a high-end, deluxe bow release, and while there a few things that we find less-than-perfect, there's a lot we like about it. We'll start with...

The HBC is Shaped for the Hand

If you look at the HBC vs. previous iterations of the model, you'll see that it has a more "ergonomic" design, which... honestly, we don't *really* know what "ergonomic" means, but we imagine it means "designed sleekly so you can use it gracefully" or something like that. We think that fits the bill, because the piece does look pretty sleek:

Each of the finger locations is precisely and smoothly designed, and perhaps our favorite aspect of the release is that pinky slot (at the end of the release)—that hook continues quite a far ways, to what looks like more than half-a-circle. That can provide a lot of security and stability. Note: the HBC is also made in a 3-finger variety, the Tru Fire HBC 3-Finger, so if you don't like the feeling of a 4-finger model—and some people do find them a bit cumbersome—you can explore that. 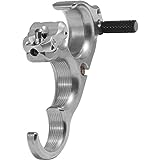 The release also tapers back a little bit towards the base, and that design is to allow the user to loose an arrow with less effort (the taper means the release is already pulled back a little bit, so you need to rotate your hand less to release an arrow). That functionality—letting your arrows fly with less action/movement—is part of what people want in a hinge release, so that's a good improvement.

The Pointer Finger Loop is Smooth, While the Middle and Ring Fingers are Grooved

This doesn't sound like a big deal, but it's actually a very smart design.

Yes, that sentence was long and wordy, but we’ve read it a dozen times and it makes sense—and that movement is ultimately what people are looking for when they use a hinge release.

While the pointer finger loop is smooth, the other loops have a groove on them. Because those are the fingers that will move as you activate the bow release, it makes sense to have that feature, because it provides a little more grip and control as you turn the release. Also a good thing.

The next item in our Tru Ball HBC review is actually a very important feature:

Bow releases come in all shapes and sizes, but we've found that the most worthwhile options are all highly adjustable. That's the case on the Honey Badger Claw, and you can make it hotter or colder as you please.

By the way, those terms often confuse people who are new to hinge releases—a "hot" release is one that allows you to shoot arrows without much activation of the release, whereas a "cold" one will require you to rotate it a little more to let loose an arrow. So if you realize your release is a little hot and it's letting arrows loose a little bit before you want to, you can dial things down a little, you adjust it so that it takes a little more manipulation to activate.

By the way, if you’re not crazy about the HBC but want another option that’s highly adjustable, you may want to take a look at the Tru Ball Abyss Flex. There are a lot of similarities between the two.

You Can Adjust It So That It Clicks or Does Not, And...

This, perhaps, is the other "big feature" of the release. When you're at full draw, and you turn the release back so that it shoots an arrow, the HBC will a single "click" sound to let you know you're about to let an arrow loose.

This is an interesting feature, because some people love it, and some people hate it. Those who love it usually say it lets them feel like they have more control over their arrows, while those who hate it usually say that click notifies them that they’re about to shoot and makes them jump and actually decreases their accuracy, and defeats the purpose of using a hinge release.

So… options! You can keep this setting, or turn it off. It’s up to you, and that always a nice thing.

It's Manufactured in a Brass Model

This is another one of those features some people like, and some people don't. Brass is supposed be a little heavier than some of the other materials that manufacturers use to make bow releases, and the theory is that when you're at full draw and you activate the release, a heavier bow release will cause your hand to move less than a lighter one—and therefore your hand will be less likely to interfere with the D-loop / bow string, and your shot will be cleaner.

Some people find that to be the case, while others don't. There are plenty of folks, too, who don't want to add any more weight to their bow, and skip the brass for that release. Another "whatever-suits-your-fancy" feature.

What We Don't Like About the Honey Badger Claw

Nothing is perfect, and while this is a very capable hinge release, there are two things we're not in love with:

Adjusting the HBC Can Be a Difficult Hassle

This may be more of a complaint about ALL bow releases, and not just the HBC, but we found it very difficult to adjust. And, if it were not for this video, we'd have never figured it out:

The adjustment mechanisms on most bow releases are NOT intuitive, and that's the case here. You can, with practice, figure it out, so it's not a hard complaint—just something we'd like to share.

We're big fans of Tru Ball, but there are some other options that aren't as fancy, that we believe operate to the same level of performance. One model would be the Scott Archery Ascent Micro Hinge Release.

It offers a lot of the same functionality and adjustability. If you have your heart set on the HBC, don't let us stop you, but if you're looking for an alternative, the Scott would be our suggestion.

The Honey Badger Claw: Wrapping Up

Alright, that about does it for the HBC. To sum up, we like the design—it's made for stability, which can be an issue with hinge releases, and it features a lot of potential for adjustability, which is something we hope to see on a high-end release. It can be a challenge to use, especially if you're new to hinge releases, but we think it's a fine release and it's made with a lot of nice features, and with some tuning and some practice, it can be a powerful tool.

We hope that helps—good luck, have fun, and happy bow releasing!