Tru Ball makes a wide range of releases, and the Max Pro is one of their more interesting models. It's not the best-known release in their catalogue, and we find that surprising, because it’s got a lot of nice features to it.

So, we’ll dive into the details of our Tru Ball Max Pro review below, but here's a quick summary of how we believe it shakes out:

As far as hand-held thumb releases go, this is—in our humble opinion, of course—a very solid bet. It's got a full, 4-finger design for easy and stable gripping, it's ergonomically designed to fit in the hand and that lends it to longer training sessions, and it's very adjustable, meaning you can make the trigger "hot" or "cold" to suit your tastes and needs. It's not perfect, and there are limits to its adjustability—and we'd also like to see a 3-finger version made—but overall, we think it's a great option for both target shooters and bow hunters.

Alright, let's expand on each of those features, and see how the Max Pro may or may not fit your needs.

There's a lot we like about this model, but here are the highlights:

If you take a look at the head of the release—that part that holds the calipers—you'll find that it rotates a full 360 degrees. That means that when you draw your bow string back, the head will twist and turn so that your D-loop / bow string can stay in place, even if your draw cycle is a little wonky, and your draw hand isn't perfectly steady. That's a great feature, and we think it's *really* a great feature if you're a beginner or advanced beginner and your draw isn't yet seamless.

So that's a solid plus. It may seem like a "gimmee," but you'd be surprised at how many bow releases don't have a rotating head.

It Has Very Decent Adjustability

This is, perhaps, the feature that sets apart top-tier bow releases from mid-range or basic ones: the ability to adjust the settings of the bow release to your personal draw cycle.

On the Max Pro, you can adjust the thumb barrel either forward or backward—that's pretty typical on a handheld release, and not a huge deal—but you can also adjust the sensitivity of the calipers at the head of the release.

That is a big deal, and it's a huge plus, because it means you can basically change the nature of the release. If you like your trigger "hot," where it releases your bow string with the sliiiiiiiiightest touch, you can make it so; if you want to "cool" it down a little bit, so that you really need to pull the thumb barrel back a ways before you shoot, you can do that too. That functionality is something we look for in the releases we review.

Keep in mind, you may want to change the settings not only according to your tastes, but according to your activity—target shooters usually prefer a very light trigger that provides a little bit of surprise, whereas bow hunters usually don't like that, and want to de-sensitize it a little bit, so they don't mistakenly shoot an arrow because their glove grazed the trigger (or something like that).

As with most things, options are a wonderful thing, and the ability to adjust your settings is a big advantage of the Max Pro.

It's Silent and the Jaws Automatically Shut After Use

You'd be surprised how many bow releases are LOUD when you activate them. That's not really a big deal if you're target shooting or in a tournament, but if you're bow hunting, it's... well, it's a big deal. A dealbreaker, even. That's why it's very nice that the Max Pro is designed for silence.

Keep in mind, it is NOT quiet upon closure—after you loose an arrow and the jaws close, there's some sound when the jaws meet—but before and during your draw cycle, including release of the arrow, the release is designed to be totally quiet.

The jaws also shut closed after every shot, which is a really nice feature. There are plenty of great bow releases out there that require you to manually shut them after use, and while that's not the worst thing in the world, it can be a bit of a pain. It's also nice because you can attach the bow release to the D-loop on your bow string, and go about your business. It'll hang there while you move around your environment, waiting until you're ready.

It Just Feels Good in the Hand

Older hand-held releases had a sort of "flat" design—they looked a little bit like bars, and they had grooves for your fingers, but that was about it. They weren't very comfortable, and they could even be a little bit dangerous, because they were hard to grasp.

Compare that to the swept-back, recessed design of the Max Pro—it eases gently backwards from the top (where your index finger goes) to the bottom (where your pinky finger goes). That's a much more ergonomic design, made to work with the contours of the human hand, and it's designed to feel very natural. The Tru Ball Fang is another release that has a nice shape to it (and you can click here for our review of the Tru Ball Fang).

(That, by the way, is why we think many people prefer 4-finger bow releases over 3-finger releases—it feels more natural. If you were to grasp a pole or a baseball bat or whatever, you'd grasp it with 4 fingers instead of 3, because it would provide you with more control. Grasping it with 3 would feel odd. We imagine the same is true for bow releases—there's something psychological about using 4 fingers to grasp instead of 3. That's our theory, anyway. There realize there are plenty of folks who use and love 3-finger releases and shoot with them safely, so maybe it's not an air-tight theory, but it's what we're going with today).

Getting back to things...

There are two other reasons why that ergonomic design is a real plus: 1) not only does it feel natural, and it makes the bow release dramatically easier to use, but 2) it makes it dramatically easier to use for longer shooting sessions. On those old, bar-style releases, long practice sessions could become torturous, and your hands would cramp and blister very quickly. With the ergonomic design, it's easier to train longer without running into those issues.

Also, one other thing before we move on: the thumb barrel itself has a type of knurling (that is, raised bumps) to catch the skin on your thumb. That also feels pleasant, and it gives it a little added security to make it less likely your thumb will slip over it.

Alas, nothing is perfect. While there's a lot we like about the Tru Ball Max Pro, there are one or two aspects that miss the mark (so to say). They are:

The Pro Is Only Made in 4-Finger Versions

Very often, manufacturers will make two versions of a hand-held bow releases—a 3-finger version and a 4-finger version—but Tru Ball declined to do that here. That's a bummer. It may be the case that they want you to look at the Tru Ball Max Hunter 3 bow release if you're looking for a 3-fingered release— 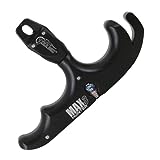 it's very similar, and offers much of the same functionality—but we can't say for sure. It would be nice if they made this with a 3-finger design.

The Release Head May Be a Little Thick

If you look at the head of the release, you'll see that it's actually a little thicker than many other hand-held bow releases. Some people feel that the thickness of that part of the release gets in the way of things, and feels too thick between the knuckles. There's some truth to that—if you compare it to the Tru Fire Edge bow release, you'll see that the Edge features a "slimmer" rod that holds the calipers.

That's not a huge deal, but if that sort of thing drives you crazy, it's something you should know. The Tru Fire Edge may be a good alternative if you think that’ll be an issue.

We Find the Lanyard Unnecessary

This, too, isn't the end of the world, but it's a little add-on that doesn't really do much (and in fact, we usually cut this sort of thing off). If you're a bow hunter, it makes more sense to attach the release to the bow string, than to attach it to your wrist via a lanyard. Again, not the biggest deal in the world, but something we would change if we were running the show.

Let's Stick a Fork in This One

Alright! We feel like this is a pretty good summary of the Pro, and that should wrap up our Tru Ball Max Pro review. All in all, we think it's a very solid release, and it can be a great option for both target shooters and bow hunters. It's quiet, it's designed for a comfortable feel, and it's adjustable. Our main gripe about it is the thickness of the actual release rod, but that's not the end of the world, and you can check out the Tru Fire Edge if that bothers you.

Alright, that's it for us! We hope that helps—have fun, be safe, and straight shooting!