If you've been in the archery / bow hunting game for a while, you've probably seen the explosion of bow release options that have become available. That's a great thing, for sure—but it can make selection a little bit difficult. 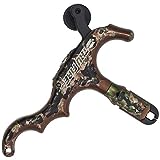 So in the post below, we'll go over a really popular model—the Tru Fire Edge 4-Finger Bow Release—and we'll share what we like about it, who we think it's a good fit for, and who might want to look elsewhere. After all that, we'll save you a LOT of time and provide a few pictures on how to adjust the trigger travel—something that's not always so intuitive.

We'll start with a quick overview, and then get into the particulars.

Hand-held releases look pretty simple—after all, it's a grip and something to grasp the bow-string—but there's a lot going on behind the scenes, and they're not all made equal. We think the Tru Fire Edge 4-Finger Release is a very solid option, and has everything we'd hope to see in a hand-held caliper bow release: it's got an adjustable thumb trigger (that's not widely adjustable, but still pretty good), but more importantly, it has an adjustable trigger, and it's designed so that you can set it to be very light or very heavy. That can make it a good option both for both hunters (who might like a heavier trigger) and target shooters / tournament archers (who might prefer a lighter target). In our opinion, a well-made and capable release.

The Features on the Edge 4-Finger

While all the features are significant, the first two are probably the most noteworthy:

It might seem like this would be a bigger deal on a trigger-style wrist release, but trigger travel can be pretty darn important on a hand-held thumb release, too. The Tru Fire Edge 4-Finger allows you to adjust the settings for a longer/heavier pull—or a shorter/lighter one, if that's what you're looking for. As a general rule of thumb, bow hunters like a heavier pull (especially if they're hunting in the winter and they've got gloves on), and target shooters like a lighter pull (they can take a lot of time to aim, and a little bit of surprise with a light trigger can get rid of some aiming anxiety).

As for the trigger itself, if you like rough surfaces, it's what we'd call "kinetically pleasing." It's got some aggressive knurling (meaning, it features large bumps on the surface), so your skin/glove can meet some friction against it. That's a good thing—you don't really want a thumb trigger to be smooth, as that would make it hard to use.

This is a pretty common trait among higher-end bow releases (and we would classify this as a "higher-end/deluxe" model). As you draw the bow string back, your draw hand will most likely torque the D-loop a little bit, so that rotational ability is designed to put a little less tug less on that D-loop. That 360-degree rotation is a good feature for everyone, but if you've got a quirky draw cycle, it might be a particularly useful one.

Why isn't everything in camo? Seriously. We see SO. MUCH. HUNTING. GEAR. that's in purple and blue and red—stick to camo! Even target shooters who hang out at the range like camo. Just make everything camo. Seriously—there are so many fantastic bow releases that are manufactured in bright colors, it's a little weird. We get that companies need to make their products look unique, but the point of bowhunting products is to literally blend into its surroundings.

Anyway—that's our rant and we're sticking to it. The Edge is camo, and we appreciate that.

It's for Righties and Lefties

Another nice feature. Just a heads up—it takes a little bit of adjusting to switch it from right-handed to left-handed, but it's not too bad. Basically all you need to do is unscrew the thumb barrel, flip it to the other side of the trigger, and screw it in again.

And… that's it, really! Bow releases—particularly hand-held ones—only offer a few specific features, but the presence (and quality) of those features is what makes one model better than another.

So now that we’ve gone over the features in our Tru Fire Edge review, let’s discuss why it may—or may not—be a good option.

The Model May Be a Good Option If...

Let's take a moment and interpret those features. The Edge 4-Finger can be a good choice if...

There are plenty of great 3-finger bow releases out there, and some people love them. For the most part, people like them because they're smaller, and that can be a big deal in a hunting situation—gear can slow you down, and if you like to attach your bow release to your D-loop and then go about your business, it's better for it to be smaller.

That said, 4-finger releases—in our humble opinion—just feel better. They're easier to grasp, and you're shooting a bow with a really heavy draw weight, that “graspability” can be a really important factor.

So, like so much of archery / bowhunting gear, it's a matter of personal preference. By the way, we usually recommend the Tru Ball Archery Fang to those looking for a 3-fingered release. It's made in a 3-finger and a 4-finger version, so if you like this one, be sure to get the version you want.

You're a Bowhunter and a Target Shooter

We think this is a great "dual-use" option, and if you like to spend a lot of time at the range practicing with the gear that you'll use on a hunt, this can be fit that bill. You can go from one activity to the other without too much effort, and if you want to change the sensitivity of the trigger, it’s not too difficult.

You May Want to Look for Another Release If...

There are two reasons why we might suggest you look for another bow release, and they are:

You're Not a Fan of Caliper Releases

Over the last ten years, we've seen a huge surge in the types of bow releases that are manufactured, with a wide variation of features—there are 3-fingered, 4-fingered, open-jawed, closed-jaw, adjustable, etc. Perhaps the most important feature difference is between caliper-style bow releases (like this one) and hook-style releases.

Caliper releases are great because you can attach them to the D-loop on your bow string and leave it there while you go offer and do other things. That's a big advantage, because it means when "go time" comes around, you don't have to go searching through your jacket / gear to find your release.

But there are a few negatives to them as well, and the action of the calipers against your D-loop can wear it down over time. That seems to be the biggest concern that people have.

So some people prefer a hook-style bow release. You can't always attach it to your bowstring, but (with a little practice), you can hook it to your D-loop without looking (which is great when you spot game and don't want to look away), and it's easier on your D-loop over time, as there's less friction against the hook.

So, as with all things, it's something of a trade-off, but if you're looking for a very similar hook-style hand-held bow release, we usually recommend the Tru Fire Hardcore). It has many of the same features at the Edge (and a few more, actually).

To be fair, in the world of hand-held bow releases, this doesn't really come with that many things to adjust, but if you do want to make some adjustments, it can be difficult to figure out.

Tru Fire (well, technically, their parent company Feradyne) offers some assistance about the Edge, but it can be a little difficult to understand, so we're going to save you a looooooot of headache and provide you with some images:

To adjust the trigger travel on the Tru Fire Edge 4-Finger Release, hold it in your hand, like so... ...and then pull back the thumb barrel, and you should see the set screw: If you don't see the set screw, turn the head of the release (where the calipers are). It should also rotate the silver knob that holds the set screw. Here’s what it looks like close-up: And there you go!

The End of the Edge Review

There you have it! That brings us to the end of our Tru Fire Edge 4-Finger Release review. We like this bow release a lot, and have used it for a while now. The calipers have held true for a while, and the 4-finger design makes it very easy to grasp. Two thumbs up.