Welcome! In this post, we'll discuss ARROW RESTS: specifically, what I believe to be the best arrow rest for a recurve bow. Then, below that, I'll get into some of the details about arrow rests—why some people use them, what "shooting off the shelf" means, and some other rest options you have. Arrow rests are one of those features that can be confusing when you're using a recurve bow, so hopefully this post will provide some guidance for you. 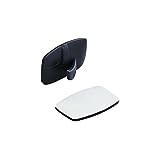 Our first arrow rest may be the most popular one on our list, and chances are you may have seen it at the range or on a friend's bow: it's the Bear Weather Arrow Rest. It's made of a soft plastic that flexes forward when you shoot, so your vanes don't come into contact with the rest when they leave your bow string. It's got an adhesive back, so you simply remove the sticker, and apply it to your riser. Easy peasy, good to go!

One thing to note: many rests have a hole in them, where your plunger button can stick out; this rest doesn't have that, so if you're planning on using a plunger (and I discuss plungers more below), then you should look at... 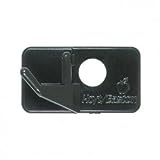 The Hoyt / Easton Archery Arrow Rest. I end up using a lot of products made by Easton; they've been around for years, and almost everything I've bought from them has been well-made and functional. In my opinion, this is a great rest, and very similar to the Bear Weather Arrow Rest—made of a very soft plastic, pliant, and sturdy. This is great for folks who have a little experience under their belt, and are ready to start using a plunger button.

My favorite thing about this rest—and it's a small detail, but it means the world to me—is that the top and the bottom of this rest are totally parallel, and that means I can clearly see that I'm putting the rest on correctly. I like all my equipment to be totally level, so I love this little detail. 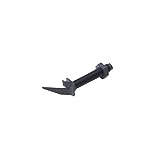 There's one more type of elevated rest you can use, and that's the SAS Screw On Arrow Rest. If you don't like the idea of sticking something to your bow, this can be a great option (just make sure that your bow has an area by the shelf where you can screw this thing in).

Some people prefer this model because it has a long "arm"—that is, the rest itself juts out a little further—and that may mean more clearance of the arrow, and less contact between the arrow's vanes and the rest. I've never seen a slow-motion video capture of that, but it sounds reasonable.

The other advantage of the SAS Screw On Rest is that you can manually adjust it so that your rest is further right or further left (whereas with an adhesive rest, it is where it is!). If you think the vanes of your arrows are hitting the bow as they leave the bow string, that could be an easy fix.

If You're Shooting Off the Shelf

If you decide you don't want to shoot off an elevated rest, you'll probably need to dress your shelf a little bit. Here are some options:

The Bear Archery Silent Plate is a very good option to carpet your shelf. It's thin but sturdy, and you can cut it to the shape you need it to be. The adhesive is very strong, and it seems to stick to the shelf for a while. And, Bear Archery has been around for a long time (they were formed in 1933!), and they have a very good reputation.

This has a nice neutral look, so if you're trying to maintain the natural look of your recurve or your longbow, this can be a good option.

The Calf Hair Arrow Rest looks the most natural to me—it resembles fur (I'm not sure if it's actual calf hair) but it looks pretty similar. This comes with a side plate, so that your arrow doesn't knock against the riser, and that's a fantastic inclusion—shooting off the shelf is going to be very difficult if you don't have something to soften the arrow's left-to-right motion.

What is the Purpose of an Arrow Rest?

It's easy to overlook because it's such a small piece of equipment, but arrow rests are actually one of the most important aspects of a bow, and they affect the flight of your arrow in dramatic ways.

That contact that an arrow has with the riser contributes to something called "The Archer's Paradox," which I've written about below.

What About "Shooting Off the Shelf"?

If you're new to archery, you'll probably hear these two terms—"shooting off a rest" and "shooting off the shelf"—and you may wonder about the difference between them. When you shoot a recurve bow, you can shoot either way.

When you shoot "off a rest," that means that you've attached an elevated rest to your bow, and you are placing your arrows on the rest before you draw the bow. If you are shooting "off the shelf," that means that you have not attached an elevated rest to your bow, and instead are placing the arrows on the platform in your riser. When people shoot off the shelf, they usually apply a soft furry fabric to the shelf, to quiet the arrow and soften any contact the arrow would make with the shelf as it sails past.

Those are generalities, though—people choose one over the other for a variety reasons. Most often, it comes down to personal taste.

It can be enjoyable to experiment and see what works for you. As I mentioned, rests aren't an extravagant item, so you can get them by the handful, put them on, take them off, and see what you like (and what's most accurate for you).

If you'll notice, one of the rests I've included above—the Hoyt / Easton Arrow Rest—has a hole in it. What's that about?

That hole is there so that you can install a plunger (sometimes called a plunger button) in your bow.

Many archers who use an elevated rest also use a plunger to manage something called "The Archer's Paradox." That's a complicated topic, but basically it refers to the motion of your arrow when you shoot. The arrow will bend as you release the bow string, and it'll resemble a snake slithering through the grass. The arrow will inevitably bend a little bit and hit the riser, and that can nudge the arrow a little bit left or right, and affect your accuracy. A plunger is a tool that anticipates that arrow banging into the riser, so that it bends a little bit less, and gives you more accurate shots.

Don't Be Surprised If You Go Through a Lot of These

Elevated rests have a tendency to wear down, and wear down quickly. Even if you're shooting arrows with feather vanes, you'll probably notice that the arm of the rest has some wear and tear. While it can be telling you that there's something off with your shot, it's usually fine—so when you're ready to replace the rest, peel it off, remove any gummy residue left from the old rest (some people use rubbing alcohol for that purpose, but a damp cloth + some soap + some elbow grease will do just fine), and apply your new rest. Good to go.

What About Magnetic Rests?

These are a little bit less popular than the arrow rests I've listed above, but they're basically the same—they have a hole/an area for a plunger, and an arm that supplies an area for the arrow to sit on—but the shelf that holds your arrow is basically just a wire. 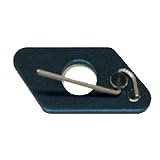 The Cartel Doosung X-Pert Magnetic Arrow Rest is one example. I prefer to use the little plastic options, and I've always enjoyed great accuracy with those, but these are an option if you'd like something more permanent (they're made out of metal, so the idea is that you don't have to replace them as often as you'd have to replace that plastic rests).

Magnetic rests are a little bit advanced, though, so if you're just starting out, a plastic rest will probably do you just fine.

Handedness Matters When It Comes to Rests