So you have entered into the world of archery and been hit with all types of different bow options. You've narrowed down to two options. Now the question is crossbows vs compound bows, but there's so much information to take in it can be overwhelming. No worries! We have your back and have compiled an extensive list that should help you make a decision between crossbows and compound bows.

The Pros and Cons of Crossbows Speed and Power: A crossbow's main advantage is its increased power. It's rare to find a crossbow that shoots a bolt under 300 FPS (feet per second), and the fastest max out around 470 FPS. Compare this to compound bows, the fastest of which top out at 350 FPS.

Speed translates to power, which we measure in "foot-pounds" of kinetic energy, or FPKE. Most crossbows produce well over 100 FPKE while very few compound bows do.

More kinetic energy means a more lethal weapon. The bolts can penetrate the thick hides and muscles of larger game. They can also compensate for less-than-accurate shots by staying the course even after striking bone or tendon.

Accuracy: Crossbows tend to be more accurate than other bows for a number of reasons.

First, as already discussed, crossbows shoot much faster. This means the bolts travel much farther before dropping, and they resist wind and air resistance.

Second, they're much easier to hold steady. Vertical bows like compound and recurve bows require you to hold them out in front of you, which is a considerable strain on the shoulders. Even the fittest bowhunter may begin to fatigue after just a few moments of aiming the bow. Crossbows, though, rest in your hand. You support them from below rather than holding them out. This position is much easier to hold steady for long periods, and that makes it easier to shoot accurately.

Similarly, you don't have to hold the bowstring drawn on a crossbow. The latch does it for you. In a recurve or longbow, you must pull the bowstring back with one hand and then hold it there until you shoot. This is a lot of work. Compound bows decrease this burden, which is known as "draw weight," but they don't eliminate it. Crossbows do. This lets you focus more on accuracy than holding back the bowstring.

Finally, the horizontal orientation of the crossbow causes the bolt to leave the bow much straighter. Before being shot, the bolt rests in a flight groove that keeps it on target.

Readiness: Last but not least, crossbows are generally just more convenient. You can cock the weapon long before you need it, and it will still be ready to shoot when your quarry comes into range after hours of waiting in a tree stand. Then, all you have to do is raise it to your eye and fire. For a compound bow, you must wait until the animal is in range to even draw the bow.

Weight: Crossbows essentially consist of a bow mounted on a stock, a whole other part. As a result, they can be a lot heavier than other bows. This is mainly a problem for long, multi-day hunting excursions that require carrying your weapon long distances, or still hunters who walk a lot during the hunt.

Crossbows make a lot more noise, defeating the primary advantage of bows over firearms. In fact, they have a conspicuous thunk caused by the bowstring striking the bolt and then vibrating considerably.

Draw Weight: Draw weight is the amount of force you need to pull back the bowstring. All other things being equal, the harder it is to pull the bowstring back, the more energy is stored in the bowstring. Since crossbows have so much more power than other bows, it makes sense that they have much higher draw weights. In fact, most people need some kind of aid like a crank to cock a crossbow. Combined with the noise, this means you pretty much only have one shot. If you miss, you'll spook the animal and certainly won't have the time to load another bolt.

Restricted Seasons: Many people take up archery because it allows them several more months of hunting season unavailable to rifles. Depending on the state, though, this may not include crossbows, or the crossbow season may not be as long as the general archery season. Check your local and state laws before crossbow hunting.

Safety and Dry Fire: Modern crossbows have extensive safety features. Still, you commonly load and cock a crossbow long before you use it, increasing the amount of time during which an accident can happen.

Besides accidentally shooting a bolt, which could hurt you or others, dry firing a crossbow is a major concern. This is when you shoot the crossbow without a bolt loaded into it. In this case, all the energy goes back into the crossbow itself and almost always damages it, sometimes rendering it unusable. These problems aren’t as common for compound bows, which you only load and draw right before you shoot.

The Pros and Cons of Compound Bows 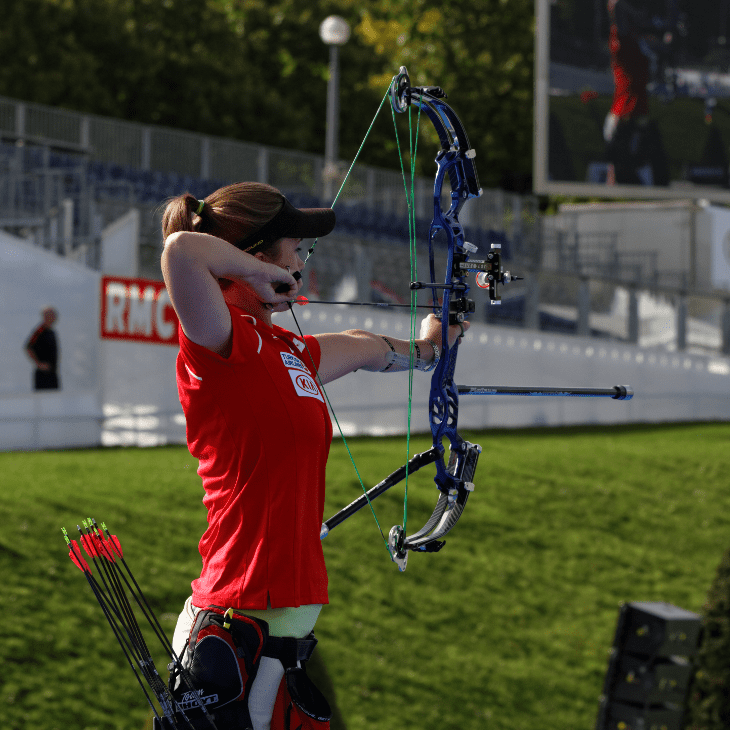 Light Weight: Compound bows are usually made entirely of materials like aluminum and carbon fiber that are extremely lightweight. This is better for hunting trips that require a lot of hiking, especially if you have to carry a lot of other heavy  equipment like a tree stand.

Vertical Orientation: Speaking of tree stands, compound bows are usually much less awkward and bulky in such confined spaces. You can stand them vertically and still have space to maneuver. This isn't the case with crossbows.

Less Noise: The primary practical advantage of the compound bow over the crossbow is its quieter shot. With the right noise dampening accessories, a compound bow can be close to silent. This is really important for the stand hunter who doesn't want to scare every animal in the woods away from his spot after one shot.

Quickdraw: Compound bows have lower draw weight and are oriented in such a way that they're much easier to load and draw. With a crossbow, you can plausible make several shots one after the other, something impossible with most crossbows.

Challenge: Many people take up archery for the challenge. Of course hunting is much easier with a rifle, but for some, that just isn't as fun. For the same reason, they may forego the crossbow for the less powerful and harder-to-aim compound bow. That makes a successful hunt that much more rewarding.

Range: Compound bows are generally slower and less powerful than crossbows. This is a downside in and of itself, but most compound bows are still perfectly capable of taking down big game. More significantly, the lower speed means a smaller range. The farther out the target, the more your arrow will be affected by gravity and wind. Compound bows usually have an effective range up to about 40 yards and no more than 60 with the most powerful bows. Crossbows, however, are usually accurate and 60 yards and some hunters go higher.

Practice: You should still practice with a crossbow, but really, if they're sighted in correctly, they're fairly straightforward. Compound bows, on the other hand, require a considerable amount of time on the range before you're ready to ethically hunt a wild animal. That's because you have to learn how to operate, hold and aim the bow correctly.

Longer ATA Length: In a tree stand or hunting blind, compound bows are usually the more compact option because you can stand them up vertically. The vertical orientation isn’t as much of an advantage for still hunters, though, who may be moving through thick brush. In fact, compound bows usually have a longer axle-to-axle length, also known as ATA. This is the distance between the axle of each cam. The longer ATA can make you more likely to accidentally rustle leaves or brush as you try to maneuver your bow through the woods.

Which Should You Choose? So which is better, crossbows or compound bows? There's no right answer. Each has its pros and cons that make it ideal for certain situations. As a bowhunter, you have to consider your goals and needs.

For example, do you want to become an archery enthusiast, or do you simply want an effective weapon that may extend your hunting season beyond the usual rifle dates? Compound bows require more dedication, so if you don't really care about archery, maybe you should go with the crossbow. On the other hand, if you're looking for a new hobby or challenge, the compound might be right for you.

In the same vein, crossbows can be better for beginners or children who might not be ready for all the different factors that go into shooting a compound bow. Crossbows shoot with a trigger, much easier for young people to learn. The increased accuracy also means they can get out and start having fun much faster.

Since the main draws of the compound bow are its stealth and easy transportation, they are the ideal choice for primitivists who want the challenge of long hunting trips. If you’re only planning to hunt from a stand on Saturday morning, this isn’t as important. You can sacrifice the light weight of a compound bow for a crossbow’s extra power.

Finally, though, you also have to consider your personal preference. Many people really like the challenge of vertical bows and the feeling of drawing, holding and shooting them. Others find the lack of power and difficult aim frustrating. Instead, they prefer the deadliness and power of a good crossbow. Both are effective weapons, so don’t be afraid to go with the option that interests you more. In the end, the whole idea is to have fun and enjoy yourself.