In the world of archery and bow hunting, there are a lot of companies that specialize in a single product. Tru Ball is one of those companies, and while they do offer a wider range of gear, their main focus seems to remain on bow releases. 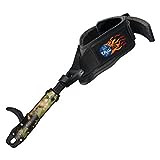 Here, we'll take a closer look at the Tru Ball Assassin, and talk about its features—what we like, what we think is OK, and what qualities make the Assassin unique. We'll start broad and then go into detail:

In our humble opinion, the Tru Ball Assassin punches above its weight, in a sense: it's a mid-range release, but it has a number of "deluxe" options that make it worth a look. It's got an adjustable draw length, a fully rotating head, a buckle on the wrist strap, and a hinge so you can fold it back into your wrist, away from your hands, when you're not using it—all great features. It's not the most adjustable model out there—while you can adjust the draw length (which is important), there are many other more adjustable bow releases on the market but it's got everything we'd hope to see in a wrist-strap bow release. Two thumbs up.

Alright, let’s dive into those features and see how it adds up.

It's a Buckle Strap. The alternative to a buckle strap is a velcro strap, and the buckle is something we usually recommend, because it allows you to use the bow release in the same way, time after time. There's a lot of info baked into that statement, so let's take a minute to dissect it:

When you use a velcro wrist release, there's no set tightness—you just tighten it up and go, and that means every time you use it, it may be at a different tightness. If it's at a different tightness, it may settle on different locations on your wrist during your draw cycle, and that can mess up your draw length, which can mess up your accuracy—because after all, your draw cycle needs to be same, shot after shot, if you're ever going to attain any type of accuracy.

So that's why we usually recommend a buckle over a velcro wrist strap: it can allow you to set the strap to the same tightness every time you use it, thereby maintaining your draw length (and all your other measurements), so you can be more accurate. If you're a veteran shooter and you have a very clear idea of your draw length etc. then velcro may not be a problem, but for everyone else—and certainly for beginners—it's something we try to avoid, so that buckle design gets a thumbs up from us.

It's a Caliper Release. The Tru Ball Assassin features two jaws that close around your D-loop / bow string, and when you pull the trigger, the jaws of the caliper separate and the D-loop/your bow string is released, allowing the string to push the arrow forward. The alternative to a caliper release is a hook-style release, which is just that—a hook that curls around your D-loop / bowstring.

We don't want to get into the "caliper vs. hook" debate—go to ArcheryTalk.com, and you'll find plenty of that!—but there are fans of both type of bow release, and caliper has its strengths. Caliper fans will tell you that 1) it provides a cleaner release than a hook, because instead of "rolling" off a hook, the D-loop/bow string is released evenly as both jaws part; 2) it's safer, and the risk of a "surprise fire" is much less with a caliper.

There's a debate about both of those points, but those are the arguments that folks in the "caliper camp" make (and we think there's some truth to both). It should be noted that one of the negatives of a caliper release is that it can be hard on a D-loop and may wear it down over time (but that takes a while).

It's a Drop-Away Model. This is another one of the important features we look for in a wrist-strap bow release: it's important that you can fold it back, so that it lays flat (or somewhat flat) against the inside of your wrist.

That feature keeps the rod and head of the bow release from flopping around and banging into everything as you move around, but it's still attached to you, so that you can move it into position when "go time" arrives, and you don't have to scurry around looking for it (which sometimes happens with hand-held bow releases).

So that's a big plus of this model, and a feature we like a lot. It's particularly good if you're a spot-and-stalk hunter, because you can carry it with you and not have to look for it when you arrive at your quarry.

Globo-Swivel! We kind of chuckle at the term "globo-swivel," because it sounds so "advertise-y," but it's actually a really great feature (and when you *don't* have this feature on a wrist release, it can be very difficult to use).

Basically, the head of the bow release is capable of turning 360 degrees (hence the "globo," as in global swivel), and that makes it a lot easier to pull the bow string back during your draw cycle. Instead of having to pull straight back, you can ease your wrist a little bit and you're anchored in place.

If you've got a wonky draw cycle, this can be a very nice thing to have.

Draw Length Adjustment. It's funny—we've reviewed what feels like dozens of bow releases, and even though a lot of releases have a draw length adjustment, many don't really make a big deal out of it. That's odd, because it's actually a really important feature. It allows you to lengthen or shorten the rod that holds the bow release mechanism, so that you can draw to your proper draw length.

You'll have to experiment with this a little bit, and find what works for you—and that can take a while, so you may need some patience—but setting the bow release so that your draw length is in the right place is very important.

The Jaws Closes After Your Shot. This is another nice feature: after you loose an arrow, the calipers return to the shut position. Not all bow releases have that functionality, and it's not an absolute requirement, but it's good to have.

So, there's a lot to like here, and as we said in our "Summary" section above, we think this is a great bow release. However, it's not for everyone, so here are some things to look out for:

You May to Avoid the Assassin If...

You want to LIVE!

You may want to avoid the Tru Ball Assassin Bow Release if...

You Want a Highly Adjustable Bow Release. The Tru Ball Assassin feature draw length adjustment, and that's a great thing, but it's not one of the most adjustable releases we've seen. The Tru-Fire TRUFIRE Hardcore Buckle Foldback MAX has a lot more adjustability settings,

so if you're the kind of shooter who wants to get everything juuuuuuuuuuuuust so, you may want to check that one out.

You Want a "Hands-Free" Hunting Experience. Many guys and gals don't really mind a wrist release like this one, because of that drop-away/hinge that allows you to fold the release back onto the inside of your wrist and go about your business. If, however, you'll be hunting in extreme cold with a huge hunting jacket and you can't fold it back properly, or you simply don't like the feel of something on your wrist at all times, you may want to consider a hand-held bow release. When it comes to hand-helds, we like the Whipper Snapper a lot.

Fasten the Assassin and Get Practicin’

That about wraps up our Tru Ball Assassin review. We think it's a strong option if you're looking for 1) a wrist-strap release with a buckle, 2) a caliper-style head, and 3) decent adjustability. It's not the fanciest model in the world, but with tuning and a bit of practice, we think it can be a great option for most bow hunters / target archers.

That's it from us—good luck, have fun, and be safe!